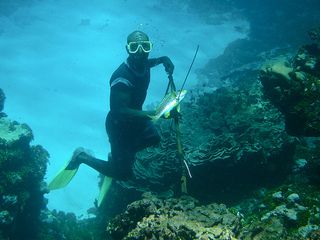 Fish that grow up in protected reserves aren't as wary of humans as fish in more heavily trafficked areas.
(Image: © ARC Centre of Excellence for Coral Reef Studies)

Fish that grow up in protected reserves are more naïve than ones in regularly fished areas and are easier to catch, since they don't turn tail at the first sight of humans. But new research reveals that this naiveté persists a short distance outside reserves, as well.

This "naivety radius" presents an unexpected windfall for fishermen lurking on the border of these protected areas, and presents a reason why reserves should be supported, according to a statement from Australia's ARC Centre of Excellence for Coral Reef Studies, which conducted the study.

Fish that grow up in reserves let spear fishers get 3-6 feet (1-2 meters) closer than those on the outside, according to the study published online this month in the journal Ecology Letters.

The "naivety radius" extended at least 500 feet (150 m) beyond marine reserves, the study found. Beyond that, the fish grow more educated and wary of humans wielding spear guns, the researchers said in a statement.

The study was conducted in the Philippines by a team of ARC scientists, who said the findings could help local fishermen become more supportive of marine reserves, since these areas foster a bountiful catch well outside their boundaries.

"On the face of it, this work suggests that marine reserves can play an important role in putting more fish on the table of local communities in these tropical locations — as well as conserving overall fish stocks and replenishing those outside the reserve," researcher Fraser Januchowski-Hartley said.