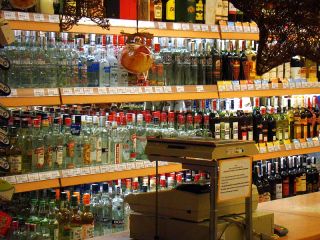 A band of sunshine crept under a window shade, which refracted light through a vodka bottle in a cardboard display case, which set the display case ablaze, which burst open the vodka bottles, which spewed fuel on the blossoming fire, which sent 12-foot (3.66 meter) plumes of flame soaring toward the ceiling of a mom-and-pop liquor store in a town called Burnsville.

It's the kind of claim that you don't make to an insurance company unless you have video evidence. But Red Lion Liquors in Burnsville, Minn., has a surveillance setup and filmed every unlucky step of the spontaneous Rube Goldberg machine.

"It's the unexpected things that can kind of sucker-punch you," Red Lion manager Dave Hautman told a local Fox News affiliate about the arson committed by his store's own products.

The offending bottle set the blaze in the same way that a magnifying glass ignites a pile of dry leaves.

Light refracts, or changes direction, as it passes from one medium — such as air, glass or vodka — to another at an angle. This principle accounts for the way a straight drinking straw can appear to be bent or broken where it breaches the surface of a glass of water, as this is the boundary where light changes course.

Certain surfaces, such as the lens of a magnifying glass, are constructed so that all the light that passes through them redirects toward a single point at a set distance from the lens, called the focal point. By collecting photons that land on a wide surface area and converging them on a single point, a lens (or a glass vodka bottle mimicking a lens) concentrates the energy carried by all of those photons on that tiny area.

When enough of these energetic photons start bombarding the atoms in a specific piece of cardboard or leaf at the same time, chemical bonds will begin to break, and if there's some oxygen in the mix, the chemical reaction known as fire ensues.

A magnifying glass with a diameter of about 3 inches (7.62 centimeters) and a focal length (the distance from the lens to the focal point) of about 9 inches (22.9 cm) can instantly make the sunlight that lands on the focal point 1,000 times more concentrated than the light that lands on the hand that holds the glass, according to Thomas Baer, a Stanford physicist who spoke to National Public Radio's "Science Friday" program. (The human eye also has a lens; it concentrates sunlight by a factor of 2,500, which is why it's a really bad idea to stare at the sun.)

The vodka bottles that started the Red Lion fire exacerbated the blaze once they ruptured and spilled their flammable contents, but the fire might just as well have been started by bottles of water if conditions were right.

In 2010, scientists at the University of Budapest determined that droplets of water suspended above the leaves of plants that have waxy hairs can act as focusing lenses, leaving sunburns on the leaves beneath them, and the researchers claimed that droplets caught on small human hairs can have a similar effect. Their experiments never resulted in the eruption of open flames on the leaves, but the amateur scientist in this video shows how you can start a fire using a plastic bag filled with water as a lens.

Thanks to a sprinkler system and a speedy emergency response, the fire in Burnsville never got out of control, and the costliest damage took the form of about $54,000 of discarded liquor.