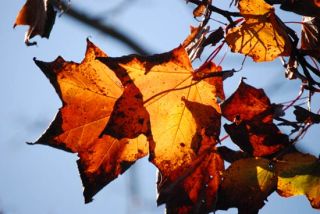 Many gardeners swear you should not water in the midday because water droplets on plants can magnify the sun's rays and burn leaves. But the idea has never been rigorously tested, until now.

"This is far from a trivial question," said biophysicist Gabor Horvath at Eotvos University in Budapest, Hungary. "The prevailing opinion is that forest fires can be sparked by intense sunlight focused by water drops on dried-out vegetation."

Horvath and colleagues used both experiments and computer modeling to figure out the physics that goes on. The results varied depending on the type of leaf.

On smooth surfaces, such as a healthy maple leaf, no leaf burn occurred.

But on leaves with small wax hairs, such as those of the floating fern, the hairs were able to hold water droplets above the leaf surface, creating a magnifying-glass effect that gave the leaves a noticeable sunburn — though no open flames resulted.

Could the same effect on a dry leaf start a forest fire?

"If the focal region of drops falls exactly on the dry plant surface intensely focused sunlight could theoretically start a fire," Horvath said. "However, the likelihood is reduced as the water drops should evaporate before this, so these claims should be treated with a grain of salt."

"In sunshine water drops residing on smooth hairless plant leaves are unlikely to damage the leaf tissue," Horvath and colleagues conclude. "However water drops held by plant hairs can indeed cause sunburn and the same phenomenon can occur when water droplets are held above human skin by body hair."

The findings are detailed in the journal New Phytologist.