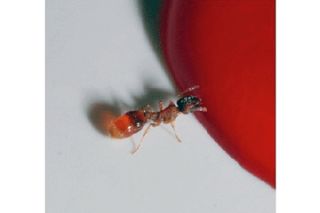 (ISNS) -- When ants are confronted with information overload and face too many decisions -- about where to live, for instance -- they revert to the wisdom of the crowd.

Despite having a brain smaller than the point of a pin, one ant species uses an elaborate system of sending out scouts to look for new homes. The scouts report back, and then the whole colony votes, according to researchers at Arizona State University.

The ants use chemistry and crowdsourcing, wrote associate professor of biology Stephen C. Pratt and graduate student Takao Sasaki at Arizona State University, in the current issue of Current Biology.

"They have tiny brains, but nonetheless, they are able to do quite a bit with them," Pratt said. Honey bees also have small brains but each brain has about a million neurons, which collectively have "quite a lot of processing power." Bees use a tail-wagging dance to communicate.

The ants involved in the ASU study, Temnothorax rugatulus are red, about one-tenth of an inch long, and live in crevices between rocks in forests in the western U.S. and parts of Europe.

The colonies themselves are not very big, usually a few hundred workers, Pratt said, and if an animal knocks a colony over, the roof falls in, or if they need more space,  the ants have to move.

But the ants live in areas in which the potential number of possible nest sites is overwhelming. One ant can't cope with making the decision. No one is in charge in an ant nest.

"They distribute the task among colony members," said Sasaki.

That's where the crowdsourcing comes in.

According to Pratt and Sasaki, the ants send scouts to check out some potential home sites. The scouts look at such things as the size of the entrance and how big the cavity is. If the ant likes what she sees, she returns to the colony.

She sends out a pheromone message, "Follow me," and another ant will join her in what is called tandem running. She takes her colleague out to view the potential site.

If the second ant likes what she sees, she goes back and repeats the process, bringing back another ant. If she doesn't like it, she merely returns to the colony. If enough ants like a site, the colony reaches a quorum, essentially choosing the new home.

The scouts pick up their nest mates and carry them to their new homes, usually taking the nest queen along with them.

Individual ants, confronted with two choices, had no problems picking the most suitable site. When faced with choosing among eight, however, an ant often selected the wrong place.

The two researchers tested a whole colony with the same choices, letting them send out more than one scout. The colonies, acting as a crowd, did equally well in both experiments, picking suitable sites 90 percent of the time.

"It's a shared decision," Pratt said.

Part of the advantage of the colony system, Sasaki and Pratt hypothesized, is that each scout visited only a few potential sites, minimizing the information it must process, while an individual ant, assigned to do it alone, had to visit them all and was the victim of cognitive overload.

Evolution has produced the system that best increases the possibility of colony survival.

What we are seeing, he said, is something like how the human body functions: millions of cells organized into one super-organism. In the case of the bees and ants, all the insects in the hive or nest form one individual organism.