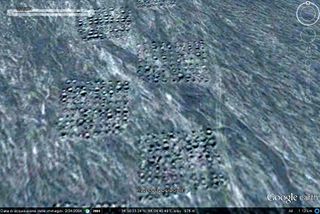 While scouring satellite images for traces of a lost Silk Road kingdom in Western China's desert, an amateur archaeologist discovered a mysterious grid of dots laid out like a chessboard.
(Image: © Amelia Carolina Sparavigna)

A mysterious grid of dots spanning several miles of Western China's sand dunes like a giant chessboard may be the result of geological surveys for nickel mines, according to new analysis of satellite images of the area.

"In the satellite maps, we can see a man-made texture on the soil, a huge band which seems created by relatively small holes or mounds," wrote the study author, Amelia Carolina Sparavigna, a physicist at Italy's Polytechnic University of Turin, on Oct. 25 on the website arXiv.org, ahead of publication to a scientific journal. "This curious texture on the desert soil was probably produced by the pinpointing of geophysical [research]."

In 2010, Sparavigna started investigating Google Earth satellite images of China’s remote Taklamakan desert to study the textures carved into the sand dunes by the wind. In the process, the amateur archaeologist found possible paths around the ruins of an ancient Silk Road Kingdom called Loulan. For more than a thousand years, a sea of caravans laden with spices, silks and other Eastern goods passed through this arid outpost on the way to Europe.

While looking for traces of other vanished kingdoms in the area, Sparavigna discovered a mysterious grid of dots, like pinpricks laid out in the design of a chessboard, that spanned 4.8 miles (8 kilometers) across. [Photos of the Mysterious Sand Dune Shapes]

"The archaeological site is quite elusive in satellite maps, but I saw this long grid on the land," Sparavigna told LiveScience in an email.

Sparavigna then found an article in the Chinese press describing the discovery of large amounts of nickel buried under the dunes. She concluded the new shapes must be evidence of geological surveying done prior to mining the nickel reserves. Geologists often drill boreholes to determine the composition of mineral deposits below the surface.

This isn't the first time Sparavigna has analyzed satellite imagery to shed light on mysterious patterns. In 2011 she discovered strange patterns she claimed were geoglyphs in Peru, and has also weighed in on the symbolic meaning of Chinese army barracks from the 1960s.

Sparavigna thinks it may be a good idea to create a database of large-scale, man-made features like these throughout the world.

“In my opinion, it can anticipate mining activity and development of a region,” she said in an email.