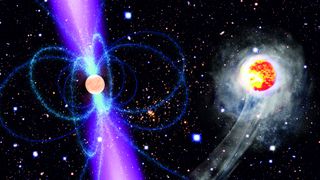 This artist's impression shows the speedy companion (right) as it races around the pulsar PSR J1311-3430 (left). The energetic gamma-radiation emitted by the pulsar heats and consequently evaporates the companion. The pulsar, which completes one orbit every 93 minutes, is surrounded by its strong magnetic field (blue).
(Image: © NASA/DOE/Fermi LAT Collaboration/AEI)

Astronomers have discovered an ultra-dense star that orbits with a dying stellar companion once every 93 minutes, making it the fastest-orbiting star of its kind.

The speedy object, a kind of neutron star called a millisecond pulsar, rockets through space at 8,100 mph (13,000 kph) or more, researchers said. Its lightweight companion — which the "black widow" pulsar is destroying with a barrage of radiation — is faster still, zipping around the system's common center of mass at 1.7 million mph (2.8 million kph) or so.

"The discovery of this first MSP from direct gamma-ray pulsations opens the door to the detection of other extreme binary pulsars," study lead author Holger Pletsch, of the Max Planck Institute for Gravitational Physics (Albert Einstein Institute) in Hanover, Germany, told SPACE.com via email. [Top 10 Strangest Things in Space]

"Such discoveries can provide key insights into pulsar emission processes and the physics of close binary evolution," Pletsch added.

Like other neutron stars, pulsars form when massive stars die in supernova explosions and their remnants collapse into compact objects made only of neutrons.

When a mass as great as our sun's is packed into a space about the size of a city, the conserved angular momentum causes the resulting neutron star to spin very rapidly and emit a ray of high-energy light that sweeps around like a lighthouse beam.

The name "pulsar" derives from the fact that this beam appears to pulse (because astronomers see the beam only when it's pointed at Earth). "Normal" pulsars spin between 0.1 and 60 times per second, or hertz, but millisecond pulsars can rotate at 700 hertz or more. [Top 10 Star Mysteries]

Millisecond pulsars are thought to be revved up by accretion of matter from a companion star. Indeed, most millisecond pulsars discovered to date are found in binary systems. The newly discovered PSR J1311-3430, which is located in the constellation Centaurus, is no exception.

Pletsch and his colleagues picked PSR J1311-3430's gamma-ray signal out of the pile of data Fermi has been collecting since its 2008 launch. It wasn't easy; it took a newly devised algorithm and a lot of computing power to find the pulsar, which rotates 390 times per second.

"It took about 5,000 CPU days to find the pulsar," Pletsch said. "The computing cost here increases with the 3rd power of the pulsar spin-frequency searched. We started searching at the lowest frequency and went upwards. This pulsar we found spins at 390 Hz. If we had to search up to 700 Hz, for example, the search would have required about 27,000 CPU days."

The gamma ray signal revealed a great deal about both the pulsar and its companion, which is presumably another stellar remnant.

For example, the team determined that the companion's diameter is less than 55,000 miles (88,000 km), making it smaller than Jupiter. But the odd object is at least eight times more massive than the giant planet, making the companion incredibly dense — about 30 times denser than our sun, in fact.

Further, the researchers were able to calculate the pulsar's extreme proximity to its partner, which has dire consequences for the companion. PSR J1311-3430's intense radiation is vaporizing its poor partner, making the MSP what astronomers call a "black widow" pulsar, after the spider species in which the female kills the male shortly after mating.

Pletsch and his colleagues report their results online today (Oct. 25) in the journal Science.

Studying the PSR J1311-3430 system could help astronomers get a better handle on the formation and evolution of millisecond pulsars, Pletsch said.

"Such pulsar systems (as the one we found) and their present-day parameters are valuable 'fossils' of their evolutionary history," he said. "Often the most robust tests come from extrema. Since this MSP binary has the shortest orbital period known, it might become a key probe for different evolutionary scenarios in future studies."

The team's new search method may also help astronomers discover many more millisecond pulsars, which have historically been very difficult to find. Until now, scientists have detected their emissions primarily in radio wavelengths, researchers said.

"Direct detection of a binary MSP from gamma-ray data opens up new possibilities for future searches and studies of these phenomena," Pletsch said. "It implies that further MSPs, including other extreme binary pulsars, may exist among the bright, as-yet unidentified gamma-ray sources, but which are too radio-faint or obscured by dense companion winds to be found in typical radio searches."