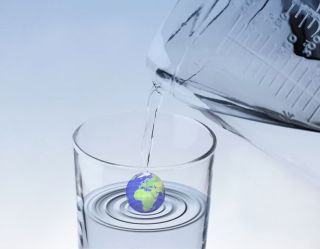 The claim that you need eight 8-ounce glasses of water a day has been debunked. Again. Drs. Dan Negoianu and Stanley Goldfarb at the University of Pennsylvania reviewed published clinical studies on the topic and found no data to suggest people need to stick to the "8 x 8" rule. "Indeed, it is unclear where this recommendation came from," they write in an editorial in the June 2008 issue of the Journal of the American Society of Nephrology. How quickly we forget. A 2002 study by Dr. Heinz Valtin, a kidney specialist at Dartmouth Medical School, reached the same conclusion. "The universal advice that has made guzzling water a national pastime is more urban myth than medical dogma and appears to lack scientific proof," Valtin's statement to the media read back then. And in December 2007, another review of existing studies debunked the myth. "There is no medical evidence to suggest that you need that much water," said Dr. Rachel Vreeman, a pediatrics research fellow. Vreeman and a colleague published their findings on 7 Medical Myths in the British Medical Journal. For the latest nail in this coffin, Negoianu and Goldfarb looked into a host of studies covering different assumptions about water intake. They found "solid evidence that individuals in hot, dry climates, as well as athletes, have an increased need for water. In addition, people with certain diseases benefit from increased fluid intake. But no such data exist for average, healthy individuals." Here are other myths they busted: Increased water intake improves kidney function and helps to clear toxins. A variety of studies reveal that drinking water does have an impact on clearance of various substances by the kidney, including sodium and urea. However, these studies do not indicate any sort of clinical benefit that might result. The "8 x 8" rule benefits the functioning of organs. Water retention in the body is variable and depends on the speed with which water is ingested. If gulped, water is more likely to be excreted. If sipped slowly, it is retained. However, no studies have documented any sort of benefit to organs based on increased water intake, regardless of speed. Drinking more water will make people feel full and curb their appetite. Proponents say this may help people maintain their weight and even help fight obesity. But studies remain inconclusive. No carefully designed clinical trials have measured the effects of water intake on weight maintenance. Water deprivation causes headaches. There are few data to back this up. Only one small trial has addressed the question, and while trial participants who increased their water intake experienced fewer headaches than those who did not, the results were not statistically significant. Water is an elixir for improved skin tone. While dehydration can decrease skin turgor (resistance to deformation), no studies have shown any clinical benefit to skin tone as a result of increased water intake. Negoianu and Goldfarb say they found no clear evidence of benefit to increasing water intake. On the other hand, no clear evidence exists of a lack of benefit. "There is simply a lack of evidence in general," they conclude.