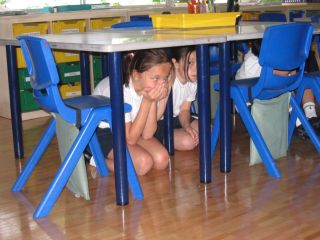 Children participating in an earthquake drill on April 23, 2009, at the British School in Tokyo.
(Image: © Douglas Given, USGS)

What do you do when the earth begins to shake, as happened when a rare earthquake struck Maine last night (Oct. 16)?

The answer probably depends upon who you are. If you're a geologist like Wright Horton, you might note the subtle P-wave, or pressure wave, which precedes the more obvious and damaging S-waves, which shake the ground back and forth during a quake.

That is how Horton, a researcher with the U.S. Geological Survey in Reston, Va., describes experiencing the 5.8 magnitude earthquake that struck the East Coast on Aug. 23, 2011.

But no matter who you are, you should "drop, cover and hold on." Such is the message of an earthquake drill being held tomorrow (Oct. 18) at 10:18 a.m. in the Southeast for the first time.

Called the "Great ShakeOut," it will also be held in other temblor-prone areas throughout the country and world, including earthquake-prone California. Although the Northeast isn't officially participating, people there can take part in the drill — and given last night's 4.0 magnitude quake, maybe they should.

The first instinct of many when they feel shaking is to run outside — that's what patrons of a pizza parlor in Portland, Maine, did last night, according to the Associated Press. But that's exactly what you're not supposed to do, Blake said.

At 10:18 a.m., people are asked to practice the actions one should take in a real earthquake: drop to the ground, take cover beneath a sturdy table or chair and hold on until the shaking stops, said Brian Blake, a spokesman for the Central U.S. Earthquake Consortium, one of the groups organizing the drill. This action provides the most protection against falling debris, the leading preventable cause of injuries during earthquakes, Blake said.

Last year's quake, which was felt by nearly a third of the United States, "showed that a lot of people don't know what to do during an earthquake," Blake told OurAmazingPlanet. "That's why we're doing this — so that people will be prepared ahead of time."

Although earthquakes aren't common on the East Coast, they do happen (as last night's Maine temblor showed), so people need to be prepared, he said.