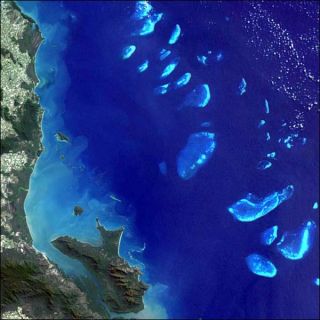 The waters of Australia's Great Barrier Reef are getting warmer, satellite measurements show, which spells bad news for the myriad creatures that dwell in this rain forest of the ocean.

The satellite measurements of ocean temperatures show that the waters in the reef have warmed by 0.36 degrees Fahrenheit (0.2 degrees Celsius) on average over the past 25 years. The change was even more pronounced in certain areas. For example, waters off the coast of Rockhampton, Australia, warmed by 0.9 F (0.5 C).

The warming increases the risk of coral bleaching, wherein the symbiotic organisms that allow coral to thrive are expelled.

The changes at the Great Barrier Reef were mirrored in altered seasonal patterns. "In some areas summer is coming earlier and lasting longer; in others, both summers and winters are warmer than in the past," Natalie Ban, a researcher with the ARC Centre of Excellence in Coral Reef Studies, said in a statement. "This all affects the sea life."

The study, to be published in the October issue of the journal Conservation Biology, raises questions about how to best manage the world's largest reefand protect its wildlife.

"Some people think we ought to have the highest levels of protection for areas that are changing the least, so they remain as refuges to recharge the surrounding reef areas," Ban said in a statement. "Others argue the opposite — that the greatest protection should be afforded to the most vulnerable areas."

The authors hope the paper will help to come up with "the best and most flexible system for managing the [reef] through what will undoubtedly be momentous environmental change," Ban said.