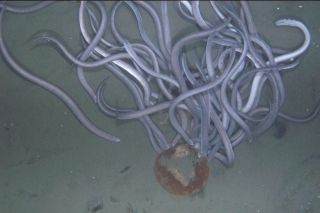 A group of hagfish next to a scallop.
(Image: © Image courtesy of the HabCam Group and the Woods Hole Oceanographic Institution.)

The oceans are getting the red-carpet treatment with a new project from Woods Hole Oceanographic Institution: HabCam, an optical imaging endeavor that provides researchers with a one-of-a-kind glimpse of the seafloor.

The "Cam" part of HabCam is a camera system that is towed over the ocean bottom along the continental shelf (where a continent drops off under the ocean) off the East Coast of the United States. The system snaps six images per second — that's a half-million images per day; then, a process corrects the color and an algorithm stitches the pictures together to create a giant panorama of the seafloor. Each day, HabCam can capture 100 nautical miles (185 kilometers) of ocean floor.

Amber York, a biology research associate at Woods Hole who works on HabCam, told OurAmazingPlanet that pictures have already sparked her interest: She has spotted an anemone and a worm that could be new species.

"As a biologist, I think what excites me more than anything about this project is the ability to see these organisms in a large scale in their natural habitat," York said. "A lot of these off-shore species are not as well-documented as the coastal ones on the beach. It's intense detective work trying to identify them." [HabCam Images: Peek Beneath the Waves]

Zigzagging over the seafloor

HabCam's 2-megapixel camera is towed on a large metal skeleton by a 103-foot (31 meters) sea scallop trawler, above coastal regions of the Northeast, including Georges Bank, the Mid-Atlantic Bight, and the Stellwagen Bank National Marine Sanctuary. To collect the photos, HabCam is towed from a ship and travels in patterns from zigzags to spirals through the ocean about 6 to 8 feet (1.8 to 2.4 m) above the seafloor, collecting more than 40 million images in total. The newest version of the system also includes a side scan acoustics system that gathers information on seafloor roughness — something that is difficult to see with the photos alone.

The pictures also give scientists a window into how marine life on the seafloor acts. In the past, biologists have used giant trawlers to scoop up critters and dump them on the deck of ships for analysis. The problem, York said, is that the creatures look different when they come up than they do in their natural habitat.

"They may change their color as they come up, or they get broken up too much in the process," she said.

HabCam also gives a peek into the way the creatures live on the floor. For example, sea stars were thought to be relatively spread out, but York has noticed that they tend to gather in armies — she calls them hordes — and eat everything in their path as they move across a scallop field.

The camera is helping scientists count scallops on the seafloor, and helping them understand the health of the ecosystem. Right now, it's being used to count scallops in a way that is much more rigorous than previous methods. They want to create a quantifiable marker for the habitat, including factors such as species richness, diversity, the composition of the material the creatures live on, and ecosystem change through time and over different areas. HabCam will help create an historical baseline for the seafloor health to be evaluated in the future.

Of course, it's a lot of work sifting through all those images. To help, those running HabCam have reached out to the Citizen Science Alliance and launched an interactive website called "Seafloor Explorer," where people can help identify scallops, sea stars and other creatures in the pictures. The project is starting with 100,000 images to annotate.

"We are interested in finding out what is happening to the seafloor over time, but we also need help in identifying individuals in all the photos," York said. The research group is working on a system to train computers to classify the images, but first they need people power to interpret what they're seeing.

York is positively pumped over the future of the field.

"I think this is just the start of a whole field of research — imaging of marine life on the seafloor," she said.