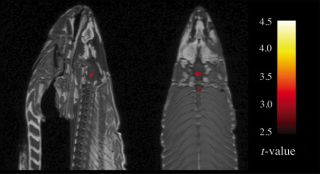 The Ig Nobel Prizes, a whimsical spoof of the Nobels held each fall at Harvard University, honors scientists from around the world who have made genuine, but also hilarious, contributions to their fields.

It was a good year for zany science. At the 22nd annual event Thursday night (Sept. 20), Dutch researchers received the Ig Nobel Prize in psychology for noticing that leaning to the left makes the Eiffel tower seem smaller ("posture-modulated estimation," they call it). The effect may result from repeated exposure to the number line, which has small numbers on the left.

American neuroscientists earned an Ig Nobel for finding brain activity in a dead salmon, demonstrating how susceptible brain scans are to false signals.

French researchers who figured out how to prevent people's bowels from exploding during colonoscopies —yes, it really happens — took home the medicine prize, while Russian engineers received the peace prize for building a contraption that converts old, unused military ammunition into diamonds.  ("Ladies, if you want diamonds, come see me after the show — but bring your own explosives," Igor Petrov said in his acceptance speech.)

Mechanical engineers at the University of California, Santa Barbara, won the fluid dynamics prize for explaining why coffee tends to spill , while physicists in the United Kingdom worked out the equation describing that trademark shape of ponytails.  A Swedish chemist claimed a prize for figuring out why so many people's hair was turning green in a small Swedish village (there was copper in the water), while a winning Japanese group developed a device that shuts people up by playing back the sound of their voice after a short delay, creating a jarring echo.

And thanks to the Emory University primatologists who won the anatomy prize, the world now knows that chimpanzees can recognize their friends' rear ends. Because humans wear clothes, we're probably not as good at this, the researchers say — and this may explain why we're extra adept at identifying people's sex simply by looking at their faces.

The only honoree not in attendance Thursday night was the U.S. Government General Accountability Office. It won the literature prize for a treatise recommending the preparation of a report to discuss the impact of reports about reports.

Befitting the research, the Ig Nobel ceremony takes a Monty Python-esque tone, interspersing the awards with absurdist operas, a Win-a-Date-with-a-Nobel-Laureate contest, audience-wide paper airplane-throwing interludes, science demos and plenty of silly hats. But ultimately, the event aims to rally excitement about science by recognizing research that, while it might not be Nobel-worthy, moves the chains of science forward in a wacky way.

"We think we have discovered one of the secrets of the universe," said Patrick Warren, a researcher at Unilever, accepting the physics prize for helping derive the ponytail-shape equation. And as a matter of fact, they have.