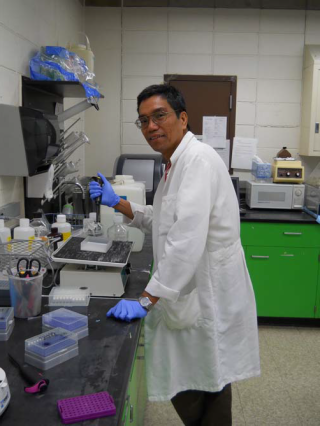 Ronaldo Ferraris is exploring whether fructose inhibits the absorption of calcium in the intestine, which can result in fragile bones.
(Image: © Courtesy of Ronaldo P. Ferraris)

In the last few decades, the food industry has greatly increased its use of fructose to improve food taste. A 12-ounce can of soda typically has 39 grams (9.7 teaspoons) of sugar, of which half is typically fructose. Derived from corn, beets and sugar cane, fructose is the sweetest of all natural sugars. Like other processed sugars, some studies have linked fructose to the obesity epidemic, increased risk of cardiovascular disease and insulin resistance.

Ronaldo Ferraris, an NSF-supported researcher at the University of Medicine and Dentistry of New Jersey, is studying whether and how fructose inhibits the intestine’s absorption of calcium, which can result in fragile bones, leading to osteoporosis in adults or rickets in children.

Calcium is a mineral with multiple functions in the body, and is critical for the structure of bones. The mineral is not produced in the body, so it must come from the diet. The demand for calcium increases at times, such as during lactation and pregnancy.

To facilitate calcium absorption, intestinal cells increase the number of channels that allow the calcium to enter. Once in the cell, the calcium attaches to a protein (calcium-binding protein) that carries it to other transport systems that are going to bring the calcium though the blood and on to other organs.

To identify the mechanisms that mediate the deleterious effects of fructose, Ferraris fed rats diets with high levels of glucose, fructose or starch. He and his team studied three groups of lactating rats and three groups of non-pregnant rats (the control group).

“Since the amounts of calcium channels and of binding proteins depend on the levels of the hormone calcitriol, we confirmed that calcitriol levels were much greater in lactating rats,” said Ferraris. Those rats also had higher levels of binding proteins in their intestines and kidneys. “However, when the rat mothers were consuming fructose, there were no increases in calcitriol levels,” Ferraris added. “The levels remained the same as those in non-pregnant rats, and as a consequence, there were no increases in intestinal and renal calcium transport.”

He also uses more advanced techniques, included chromatin immunoprecipitation assays to determine changes induced by fructose in the binding of the vitamin D receptor to the genes involved in calcium transport, and dual-energy X-ray absorptiometry to evaluate if fructose affected bone quality.

With a growing population of seniors worldwide, the number of people facing osteoporosis is increasing. The fractures associated with osteoporosis, especially hip fractures, can have severe consequences in patients’ quality of life . Studies have shown that, besides the normal complications of a surgery such as infection or bleeding, patients with hip fractures can present cardiovascular and cognitive disorders – in one study, more than half of hip fracture surgery patients were not able to walk on their own one year after the surgery.

If Ferrari’s work can show that chronically excessive fructose intake plays an important role in the development of osteoporosis, it can help shape dietary recommendations designed to decrease the incidence of this disease and related problems such as fractures.