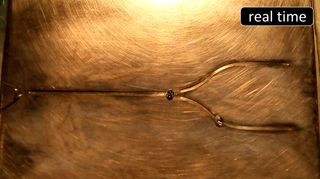 Today's computers can short out if liquid enters their innards, but water droplets could form the basis for tomorrow's electricity-free computing devices.

"I was surprised that such rebounding collisions between two droplets were never reported before, as it indeed is an easily accessible phenomenon: I conducted some of the early experiments on water-repellent plant leaves from my mother's garden," said Henrikki Mertaniemi, an applied physics researcher at Aalto University, in a statement.

The experiments showed how the water droplets could act as digital bits in memory devices or logic operations at the most basic level of computing.

For example, researchers demonstrated a "flip-flop memory" setup with a single water-repellent track forking into two tracks. A series of water droplets rolling down the single track would collide with second droplet sitting at the fork, and alternatively knock the second droplet toward one fork branch or the other — a process repeated 100 times without error.

The idea of water-based computing likely won't replace your PC or Mac, but it could lead to specialized computing in devices that don't have power sources — or in situations where you can't rely on having available power outlets.

Water computers join other wild ideas for futuristic computing that have arisen in recent years, such as test tubes filled with DNA or the genetic code of living cells.

The water computing study appears in the Sept. 4 issue of the journal Advanced Materials.