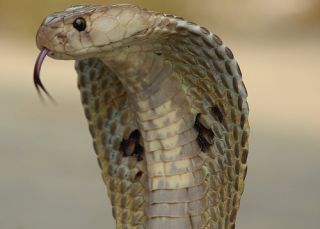 A Nepali man who was bitten by a cobra snake subsequently bit the snake to death, a local newspaper reported on Thursday (Aug. 23).

After being bitten by the snake, while he was working in his rice paddy on Tuesday, 55-year-old Mohamed Salmo Miya chased the snake, caught it and bit it until it died, the Annapurna Post reported, according to Reuters.

[Image Gallery: Snakes of the World]

"I could have killed it with a stick but bit it with my teeth instead because I was angry," Miya was quoted as saying.

Miya, who lives in a village some 125 miles (200 kilometers) southeast of the Nepali capital of Kathmandu, was receiving treatment at a village health post at the time of the news report and was not in danger of dying from his snakebite. He will not be charged with killing the snake, a local police official said, because cobras (called "goman" in Nepal) are not listed as endangered in the country.

In short, a snake has died of manbite.