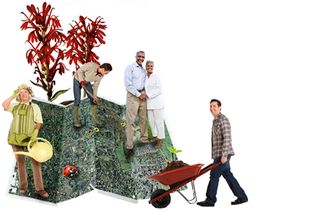 YardMap invites volunteers to share their sustainable practices with like-minded individuals, and thereby maintain a supportive community of people who manage landscapes to support wildlife.
(Image: © Cornell Lab of Ornithology)

Do you own, rent, tend or otherwise influence the management of land and want to help increase its habitat value for birds and other wildlife? If so, there is free advice on how to do so from YardMap — a new citizen-science group that helps volunteers — including homeowners, renters, gardeners, birders of all levels and others — apply sustainable, low-impact land use practices and thereby expand habitat for birds and wildlife. The National Science Foundation funds and the Cornell Lab of Ornithology runs the program.

After joining YardMap, volunteers generate a birds-eye-view of their properties or other favorite birding places by locating them on a Google Map interface using YardMap’s simple point-and-click mapping tools. In this way they can represent ecological details and improvements such as the planting of native plants, new bird feeders or solar panel installations. Volunteers then share their maps, strategies and successes with other YardMap volunteers and scientists from the Cornell Lab of Ornithology.

Scientists from the Cornell Lab of Ornithology provide YardMap volunteers with many web-based educational resources to help identify bird and plant species and generate appealing habitat for wildlife. They also provide various management tips and guidelines that are specific to various regions of the U.S.; volunteers obtain information relevant to their areas simply by submitting their zip codes to the site.

YardMap also teaches volunteers about the impacts of habitat quality, for example, the importance of the size and arrangement of habitat patches and the potential cumulative impacts of small acts on bird populations, habitat creation and carbon footprints.

By providing those resources and by connecting volunteers with one another via social networking tools, YardMap is creating a community of gardeners, bird lovers and other concerned individuals who are committed to making a difference.

The average yard in North America covers one-third of an acre. But those relatively small patches add up to a whopping 160 million acres, and thereby cumulatively constitute one of the most familiar and extensive habitats on the continent. (Fun fact: It would take one person about 4,110 years to single-handedly mow all that land!)

But, according to a YardMap study, the average North American yard is comprised of about 60 percent lawn and 20 percent house and driveway — area that is relatively useless to birds. This means that just 20 percent of the average yard is left over for bird habitat. This paucity of useful yard space for birds underscores the importance of expanding bird habitat in yards and of maximizing the productivity of existing bird habitat.

What’s more, each North American lawn is watered with an average of about 60 gallons of water per day. And yard waste that could be composted or otherwise used at home accounts for about one-eighth of all material that is dumped into landfills. Such statistics underscore the potential cumulative benefits to birds and other types of wildlife of improving management practices in America’s yards.

As YardMap volunteers promote sustainable land use practices and help create habitat for birds and other types of wildlife, they provide scientists from the Cornell Lab of Ornithology with information about their land use practices and bird sightings. By analyzing this information, scientists are addressing questions about the large-scale impacts of residential lands on birds.

“YardMap is the first project to collect spatial map data from members of the public on a large scale,” says Rhiannon Crain, the YardMap network project leader.

“The tools we’ve created focus on micro-habitat details — the kind of information that it is impossible to glean from satellite images without the people on the ground — the real experts — to tell us what’s there. This project also starts to fully explore the collaborative potential of embedding a full social network into a citizen science project. It’s not the first time citizen scientists have been able to talk to each other, but it’s the first time that it’s possible to do so around the actual data being created in real time.”

Bird conservation programs such as YardMap are important because troubling declines of bird populations have occurred over the past 40 years.

According to the U.S. Department of Interior’s State of the Birds 2009 Report, birds are not only a priceless part of America’s heritage, they are economically important.

The economic importance of birds stems, in part, from their ability to attract tourists and promote recreational activities, such as birding, as well as from the ecological services they provide. These ecological services include helping to control rodent populations as well as pollinating and dispersing the seeds of agriculturally important plants.

In addition, birds help control the populations of mosquitoes and other insects. For example they consume up to 98 percent of budworms and many other types of insects in eastern forests — a service that has been valued at as much as $5,000 per year per square mile of forests, and potentially translates into billions of dollars in environmental services, according to the State of the Birds 2009 Report.

“Birds are an excellent way to connect with people about conservation because they are accessible,” says Crain. “They are awake when we are awake. They are found in almost every area on Earth from nearly all backyards to very extreme ecosystems. Most people have up-close and personal experiences with birds, and they are amazing indicators of overall ecosystem health.”

The State of the Birds 2009 Report noted that there is “heartening evidence that strategic land management and conservation action can reverse declines of birds.” Such evidence underscores the potential for YardMap volunteers to make significant contributions to bird conservation.

ARTICLES ABOUT OTHER CITIZEN SCIENCE GROUPS

More than 100,000 volunteers annually contribute to more than 600 citizen science groups — many of which are funded by the National Science Foundation. The Cornell Lab of Ornithology sponsors other bird-oriented citizen science programs as well.

The first large-scale, open conference on public participation in scientific research will be held in Portland, Ore., on August 4 and 5, 2012.

The Ecological Society of America will publish a special issue about citizen science in Frontiers in Ecology and the Environment on August 1 that will be available for free on the Internet.