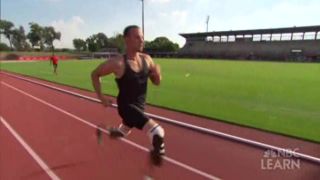 There may be one obvious difference between Oscar Pistorius of South Africa and his fellow sprinters at the London Olympics this year. Nicknamed the "Blade Runner," Pistorius is the first double amputee to qualify for the summer Olympics. He's competing wearing a pair of carbon fiber prosthetics designed for sprinting.

Yet there other interesting differences, too. His "blades" don't work exactly the way legs do, so he has to use different muscles while running to make up for it.

That doesn’t mean the blades give him an advantage over able-bodied athletes, say researchers the NSF interviewed. Pistorius has no sensation in them and they have no muscles, Herr said. Pistorius makes up for these differences by using more of his lower abdominal and upper body muscles.

Pistorius' prosthetics brought him plenty of attention in the run-up to the Olympics, especially as he argued with the International Association of Athletics Federations to be allowed to compete alongside able-bodied runners. Yet he doesn't necessarily feel very different from able-bodied athletes, he said.

"I'm very happy with my aspect of you putting on your shoes and me putting on my prosthetic legs," Pistorius said, "and that's where I see my day starting and my disability ending."