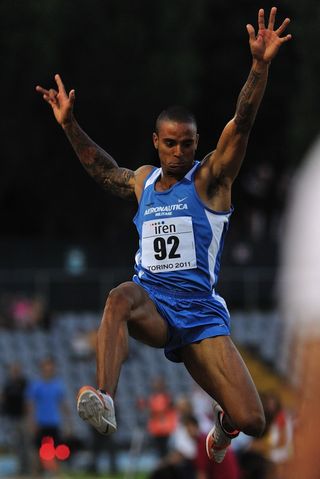 The gold medal winner of the Olympic decathlon is often dubbed "the best athlete in the world," and for good reason — these athletes compete in 10 track and field events over two days, requiring not only stamina but range.

This year's athlete to watch is Ashton Eaton, the U.S. decathlete who set a world record in the event during qualifying trials in June. In doing so, he beat out American Brian Clay, the 2008 gold medal winner who failed to qualify for the 2012 games.

Among the most technical of challenges that Eaton, Clay and other decathlon competitors face is the long jump, which requires athletes to sprint down a track and then hurl their bodies across a sand pit as far as possible.

"That's where the difficulty lies, is learning how to come in with somewhat of a rhythmic run-up, and then hit the board with as much accuracy as possible, and then of course catapult yourself and jump as far as you can into the sand," Clay told the National Science Foundation in an interview about his preparations for the event.

With the help of Melvin Ramey, an engineer for USA Track and Field, Clay used special double-lens cameras designed by car manufacturer BMW to perfect his long jump. (Hurdles and discus were Clay's downfall at the qualifying trials.)

These cameras precisely tracked Clay's movements as he sprinted and jumped in practices, allowing his coaches to calculate both his horizontal and vertical velocities. From these two values, they could then calculate Clay's take-off angle, a crucial value for a long-jumper. [Video: Maximizing the Long Jump]

"In general, world-class jumps are at a take-off angle somewhere between 18 and 22 degrees," Ramey told the National Science Foundation.

BMW is developing these cameras to help drivers not only see objects around their cars, but to judge those objects' distances. For Clay, the same cameras provide instant athletic feedback.

"With this technology, we actually will know how fast we're running, how much velocity we're maintaining off the board, and then we can do some calculations to see how far of a jump that should have been, and how far of a jump it actually was," Clay said.

The other events in the decathlon are the 100-meter sprint, the shotput, the high jump, the 400-meter run, the 110-meter hurdles, the discus throw, the pole vault, the javelin throw and the 1500-meter run.