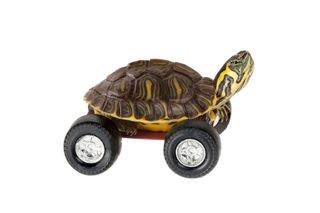 Why aren't there wheeled turtles, for instance?
(Image: © Image via Shutterstock)

From the magnetic compasses of migratory geese and dolphin sonar to beaver dams and ant agriculture, most of the ingenious stuff we humans have invented arose millions of years earlier in nature, via the slow-but-steady process of evolution. Why not the wheel?

Animals flap, flutter, float, run, walk and hop. They swim, slide, skate, oscillate, glide and paddle. Occasionally, they'll even curl up into balls and tumble head over heels. But not one animal rolls around upon a rotating body part: a biological wheel.

The fact seems even more shocking when one considers the relative simplicity of wheels compared with eyes. Whereas an eye contains a cornea, pupil, lens, retina, fovea, optic disc and optical nerve, each built of specialized cells and all of which must function perfectly to confer normal vision, a wheel consists of nothing more than a cylinder that freely revolves around a fixed axis. And yet, the eye has arisen repeatedly in Kingdom Animalia, while wheeled locomotion hasn't appeared once.

The explanation takes us to the heart of how evolution works.

Despite the complexity of the eye, it manages to evolve because each advance in its development offers some advantage. First, a creature is born with a mutant patch of light-sensitive cells on its surface, which helps it tell where the sun is. Over thousands of years, in the creature's descendants, that patch sinks to become the lining of a hole, which can better sense the direction of incoming light. Via further mutations, the hole turns into a cavity with a small opening — the pupil — creating a pinhole camera-like system. Gradually, the cavity fills with fluid, and extra parts get tacked on to better focus incoming light, such as the lens and cornea. From start to finish, a full-on eye can evolve in as little as 400,000 years, evolutionary biologists have estimated.

The wheel, on the other hand, is an irreducibly complex system: It must work perfectly to work at all. If wheels and axles are noncircular, ill-fitting, or the wrong relative diameters, they simply do not turn. The sophisticated carpentry required to fashion wheel-and-axle systems explains why humans didn't manage to invent them until the Bronze Age, when we were already casting metal alloys, constructing canals and sailboats, and even designing harps and other complex musical instruments. [Why It Took So Long to Invent the Wheel]

Evolution can only build body parts in stages, but because a rudimentary, nonrotating proto-wheel provides no benefit whatsoever to an animal, the process of wheel development is destined to never begin. "The wheel may be one of those cases where the engineering solution can be seen in plain view, yet be unattainable in evolution because its lies the other side of a deep valley," the evolutionary biologist Richard Dawkins explained in a classic 1996 article on the lack of bio-wheels in nature, published in The Sunday Times.

Finally, consider this: Even if an animal could make a sudden leap across that valley and find itself in possession of the genetic blueprint for a perfect pair of wheels, how would it even grow them? To rotate freely, wheels cannot be attached to the axles that support the rest of the body. So without attachment points, how would living wheels receive nutrients and expel waste? As Dawkins put it, "The problem of supplying a freely rotating organ with blood vessels (not to mention nerves) that don't tie themselves in knots is too vivid to need spelling out!"