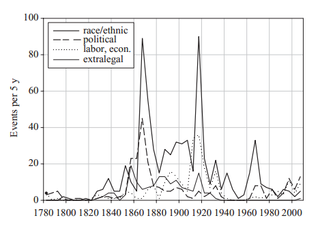 Circa 1870, the North fought the South in the Civil War. Half a century later, around 1920, worker unrest, racial tensions and anti-Communist sentiment caused another nationwide upsurge of violence. Then, 50 years later, the Vietnam War and Civil Rights Movement triggered a third peak in violent political, social and racial conflict. Fifty years after that will be 2020. If history continues to repeat itself, we can expect a violent upheaval in the United States in a few years.

It sounds like pseudoscience, but it's a published theory. "My model suggests that the next [peak in violence] will be worse than the one in 1970 because demographic variables such as wages, standards of living and a number of measures of intra-elite confrontation are all much worse this time," said Peter Turchin, an ecologist, evolutionary biologist and mathematician at the University of Connecticut.

Turchin has led the development of a field of study called "cliodynamics," in which scientists attempt to find meaningful patterns in history. The endeavor flies in the face of the traditional study of history, which assumes the countless variables interacting within a society lead to chaotic fluctuations in outcomes like violence and social unrest. Massimo Pigliucci, a philosopher of science at CUNY-Lehman College, said most historians believe that "the factors at play are so many and so variable that there is little reason to expect quasi-regular cycles, or a unified theory to explain them."

But Turchin argues there is order in the chaos after all. [Infographic: Cycles Violence in the U.S.]

In the new study, Turchin, who reported his results in the July issue of the Journal of Peace Research, compiled historical data about violent incidents in U.S. history between 1780 and 2010, including riots, terrorism, assassinations and rampages. The data indicates that a cycle of violence repeats itself every 50 years in America, like a wave that peaks in every other generation. This short-term cycle is superimposed over another, longer-term oscillation that repeats every 200 to 300 years. The slower waves in violence can either augment or suppress the 50-year peaks, depending on how the two cycles overlap.

The longer cycle is "the one which we understand much better, and it is a universal feature of all complex societies," Turchin told Life's Little Mysteries. From the Roman Empire to medieval France to ancient China, scholars have noted that societies swing between 100-150 years of relative peace and 100-150 years of conflict, and then back again. Only some societies exhibit the shorter-term, and less subtle, 50-year-long cycles of violence along the way — the Roman Empire, for one, and if Turchin's theory is correct, the United States as well.

Why 50-year cycles? Turchin explained that a surge of violence begins in the same way as a forest fire: explosively. After a period of escalation followed by sustained violence, citizens begin to "yearn for the return of stability and an end to fighting," he wrote in his paper. The prevailing social mood swings toward stifling the violence at all costs, and those who directly experienced the civil violence maintain the peace for about a human generation — 20 or 30 years. But the stability doesn't last.

Eventually, "the conflict-scarred generation dies off or retires, and a new cohort arises, people who did not experience the horrors of civil war and are not immunized against it. If the long-term social forces that brought about the first outbreak of internal hostilities are still operating, then the society will slide into the second civil war," he wrote. "As a result, periods of intense conflict tend to recur with a period of roughly two generations (40–60 years)."

Peaks occurred around 1870, 1920 and 1970. Confounding this pattern, there was no peak of U.S. violence in the 1820s. In fact, historians call it the "era of good feelings." Turchin explained that social variables such as wages and employment were "really excellent at that time, so there was no reason for any violence to get going." The cycle was skipped. [Do Recessions Increase Violent Crimes?]

But we might not be so lucky this time around. If Turchin's model is right, then the current polarization and inequality in American society will come to a head in 2020. "After the last eight years or so, notice how the discourse in our political class has become fragmented. It's really unprecedented for the last 100 years," he said. "So basically by all measures, there are social pressures for instability that are much worse than 50 years ago."

Pigliucci, who writes a well-known blog on pseudoscience and skeptical thinking, says that although he believes Turchin is "moving in the right direction" by applying mathematical models to history, in this case he might be seeing patterns in random data. Violence and other forms of social unrest undoubtedly vary over time within any given society, Pigliucci said, but most historians would say these fluctuations are chaotic.

"The database is too short: the entire study covers the period 1780-2010, a mere 230 years," he wrote in an email. "You can fit at most four 50-year peaks and two [long-term] ones. I just don't see how one could reasonably exclude that the observed pattern is random. But of course we would have to wait a lot longer to collect new data and find out."

Daniel Szechi, professor of early modern history at the University of Manchester in England, agrees that not enough time has passed for patterns to have emerged. However, he believes "cliodynamics" could eventually work, once humanity racks up a few more centuries of good record-keeping. "Maybe 500 years from now we will have sufficient data and sufficient number crunching power to really make use of the data we will have generated and stored in vast quantities since about 1900," Szechi said in an email.

But even if, half a milennium from now, massive data generation and sophisticated programmatic analysis allows predictive history, Szechi asks: "is this a good idea?" Prophecies of violence pose the danger of becoming self-fulfilling. Another concern is that governments and other institutions could respond to their knowledge of impending violence by taking preemptive measures, which would not always be in the interests of the people.

The heated debate over cliodynamics will continue among historians and scientists. Only time will tell if the cycle of U.S. violence identified by Turchin holds true, and another telltale peak — or lack thereof — is only a few years away.