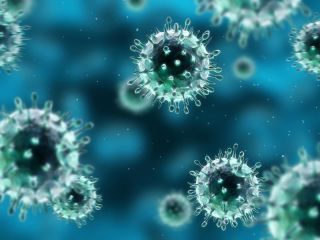 Prozac was found to keep so-called enteroviruses (which cause some types of meningitis and conjunctivitis) from replicating. Its effectiveness has been tested in cell cultures, so researchers aren't sure how it will hold up in animal and human testing.
(Image: © Sebastian Kaulitzki, Shutterstock)

A viral infection got you depressed? Maybe Prozac can help.

Researchers at the University of California, Los Angeles, have discovered an unexpected property of fluoxetine, the antidepressant drug marketed as Prozac. In laboratory tests on cell cultures, the drug appears to have antiviral properties, particularly against human enteroviruses, a genus of potential killers that includes poliovirus.

While immunization has kept poliovirus in check in most countries, other enteroviruses remain a primary cause of certain types of meningitis, encephalitis, conjunctivitis, and a host of other diseases. Second only to the common cold virus in their prevalence, enteroviruses cause an estimated 15 million infections per year in the United States, according to the Centers for Disease Control and Prevention.

There are no drugs known to treat enterovirus infections, and doctors can only allow the infection to take its course and provide supportive care.

An effective antiviral could prevent millions of sicknesses annually, the UCLA researchers said. Their study was published in July in the journal Antimicrobial Agents and Chemotherapy.

Vaccines work best when the immune system can be taught to recognize and attack a viral invader. But similar to rhinovirus, the cause of the common cold, enteroviruses have so much genetic variety that it would be too difficult to create a vaccine to prevent their infection. [Tiny & Nasty: Images of Things That Make Us Sick]

So, in search for antiviral properties, the UCLA researchers, led by Paul Krogstad, a professor of molecular and medical pharmacology, turned to the fire power of high-throughput screening (HTS), a method that enables researchers to test tens of thousands of chemical compounds in a single day using robotics.

For these screens, the group enlisted Robert Damoiseaux, the scientific director of UCLA's Molecular Screening Shared Resource (MSSR), who specializes in HTS. Together they tested a collection of approved drugs and other chemical compounds archived at the MSSR and, in doing so, found several compounds that inhibit enterovirus replication.

One compound, fluoxetine, stood out. In a series of follow-up laboratory tests on virus samples, the researchers found that fluoxetine interferes with the growth and replication of coxsackieviruses, a prominent subtype of enteroviruses. "No one could have expected this antiviral property a priori," Damoiseaux told LiveScience.

The researchers repeated the experiment on several kinds of coxsackieviruses with similar, successful results. Without being able to reproduce, these invading viruses simply would die off.

Hold off on the pills

While all of this seems straightforward, popping Prozac isn't such a wise idea to clear your viral infection. "We do not yet understand the mechanism of action, and we do not yet have any proof of antiviral effectiveness in humans or animals," Krogstad said.

Also, fluoxetine is associated with an enhanced risk of internal bleeding, and so too are some enteroviruses. The compounded risk of hemorrhaging could potentially worsen the course of infection.

Krogstad said his group needs to better understand the mechanism behind fluoxetine's ability to halt viral reproduction. In the end, this could open the door to new drugs that target viral replication minus the side effects of Prozac, to treat infections when vaccines, for whatever reason, fail to protect. And that's something to be hopeful about.