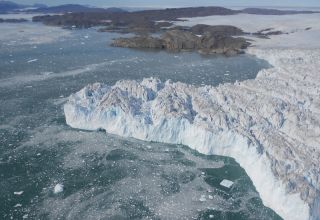 More than a dozen glaciers that dot Greenland's desolate northwest coastline appear to move in fits and starts, according to new research, sliding into the sea and bleeding ice with sudden vigor for years at a time, then mysteriously slowing, only to swing back into action up to a decade later.

The research, published today (Aug. 2) in the journal Science, used aerial photographs taken in the 1980s to peer back beyond the advent of satellite records of glacier activity in the region. The study shows that in the last 25 years the area has suffered two prolonged periods of sudden ice loss, separated by 10 years of relative quiet.

The research was inspired in part by the discovery in 2005 that glaciers in the region were accelerating their march to the sea, suddenly dumping ice off of Greenland and into the ocean at a far speedier clip than had been seen since satellite observations began in 2000.

Between 2005 and 2010, the region's glaciers lost approximately 25.5 billion tons of ice each year — a stark change from the few years prior, when the glaciers maintained a comparatively plodding pace and didn't appear to be bleeding off more ice than they were gaining from snowfall. [Image Gallery: Glaciers Before & After]

A series of detailed aerial photographs taken in 1985 provided a handy way for a team of scientists, led by Kurt H. Kjaer, an associate professor at the University of Copenhagen's Natural History Museum, to see what the glaciers had been up to before satellites were keeping watch.

Analysis of the images and of elevation data taken by airplanes in the mid-1990s revealed that the region's glaciers experienced a paroxysm of activity between 1985 and 1993, losing approximately 26.6 billion tons of ice per year.

Climate models didn't uncover any bizarre weather that would have deprived the glaciers of snow during those years, indicating that the culprit was a sudden speed-up similar to what satellites saw between 2005 and 2010.

The discovery simply adds to a large body of recent research that finds glaciers to be fickle beasts, governed by myriad processes that unfold on the order of days, years or even decades.

"As a result it's going to be pretty hard to predict how those glaciers — and Greenland as a whole — will respond to global warming. That conclusion is not new, but this research reinforces that," said study author John Wahr, a professor of physics at the University of Colorado.

In other words, Wahr told OurAmazingPlanet, it's complicated. And it's a question that is crucial for understanding what the oceans will do in the coming decades.

The glaciers of Greenland and Antarctica are key gatekeepers of global sea levels. When the massive rivers of ice speed up, they move more ice off land and into the ocean, pushing the seas higher — a phenomenon one can observe on a tiny scale by dropping an ice cube into a glass of water.

The study authors noted a correlation between periods of ocean warming and the times the glaciers sped up and lost mass, a finding that echoes research on ice loss observed in Antarctica's glaciers.

In addition, the authors suggested that detailed aerial photographs taken over both Greenland and Antarctica in the 1930s and 1940s might unroll the record of glacier activity even further, allowing scientists to hand off more data to modelers.

The main takeaway, Wahr said, is that glaciers can speed up and slow down on the time scale of a decade. "And that is something people are going to have to think about in terms of how Greenland is going to respond to high temperatures in the future."