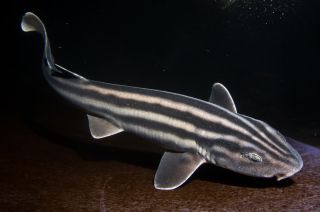 A group of African penguins that live on an indoor beach in California greeted some toothy new neighbors this week: six striped pyjama sharks.

On Tuesday (July 31), aquarium biologists at the California Academy of Sciences in San Francisco introduced the nocturnal sharks (four females and two males) to their neighbors in nature, as both species live in the wild off the South African coast.

The 2-year-old pyjama sharks, which the biologists say are docile and mild-mannered, are expected to spend much of their time in the exhibit's man-made underwater caves; since the two species rub shoulders in the wild, they should pose no threat to each other.

"During yesterday's event, the sharks were let into the tank two at a time, which piqued the interest of the penguins," biologists at the California Academy told LiveScience, collectively, in an email. "The penguins reacted with curiosity, some diving into the water to get a closer look at and feel for their new neighbors. Overall, the penguins reacted quite positively." [See Photos of Aquarium's Penguin & Shark Neighbors]

As for the sharks, they swam up to the tank's glass as if posing for photos, before retreating to their cave homes, the biologists added.

The African penguin exhibit is modeled after Boulders Beach in South Africa, where the penguins and sharks are found in the wild.

The sharks were born at an aquarium in Lisbon, Portugal, in July 2010 before being transported to the Steinhart Aquarium at the Academy a few months ago. So that biologists can monitor the sharks' feeding, they are using tactics to attract the typically nighttime bottom feeders to the surface for meal times.

Their aquarium mates, African penguins (also called jackass penguins because the sounds they make resemble a donkey's bray) grow to about 23 to 25 inches (58 to 64 cm) tall and can weigh 5 to 9 pounds (2-4 kilograms).

A Web cam is set up in the exhibit that allows the public to watch the pudgy penguins and their new "roommates."

Editor's note: This article has been updated to correct the sharks' birthdate. They were born in July 2010 and transported to the Aquarium several months ago.