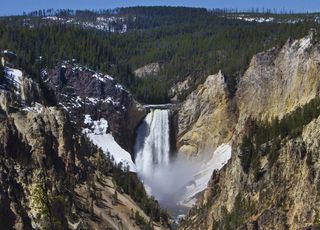 America, get ready for your close-up.

National Geographic Channel unveiled plans this week for a new, eight-part series that will turn its state-of-the art cameras on the country's homegrown beauty and showcase the grandeur of America's national parks.

But beauty won't be the only thing on display: the creators of the series also plan to capture the hidden stories that may have eluded the view of earlier-generation cameras.

"The idea is to show [the parks] off in a different way," said Michael Cascio, National Geographic Channel's executive vice president of programming. Teams of filmmakers have already fanned out to scout locations, he told OurAmazingPlanet, in search of scenes and storylines that will give people an up-close and personal feel for the national spaces.

Cascio said the series will call upon an increasingly available suite of high-tech tools — among them extreme-slow motion, time-lapse photography, and tiny cameras that can access the undercover worlds of the parks' littlest creatures.

It's still in the planning stages, but the series will likely explore one national park in each episode. Big names like Yellowstone, Yosemite and Grand Canyon — places etched deep into the American consciousness — will likely be featured, which poses an exciting challenge to filmmakers, Cascio said.

"How are we going to show the Grand Canyon in a way that hasn't been seen? It's spectacular, but how do you get that across in a way that isn't a cliché?" he said. "And that's the challenge of the entire series — telling a story that feels fresh and getting that across to a bigger and broader audience."

The national parks series is the third in a string of massive nature documentary projects National Geographic Channel has undertaken in recent years. The first, Great Migrations, which premiered in October 2010, showed off dazzling cinematography and captured moments of heartbreaking struggle, yet the incredible images were sometimes overshadowed by a heavy-handed and flowery script.

However, their most recent project, Untamed Americas, a four-part series that debuted in June, featured even more stunning photography, and a spare, well-crafted script that suited the exhilarating footage of North and South America's wildest creatures and the extreme ecosystems they call home.

The eight-part film on national parks likely won't premiere until 2015, but for National Geographic Channel, that's just around the corner, Cascio said.

"It takes so long to film these things, so for us it's coming right up — and we're extremely excited about it," he said.