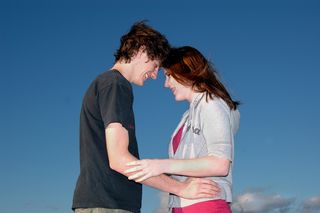 A nasal-spray puff of the so-called "love hormone" might improve your ability to interpret other people's emotions, finds an experiment that could lead to a new ways to treat some mental health disorders.

In the study, researchers in Norway gave 40 students nasal spray containing either a control dose of saltwater or a dose of oxytocin, a brain hormone known to boost feelings of calm and social bonding. The students were then shown photos of faces with angry, happy or neutral expressions. Some of the faces had more subtle emotional expressions that are typically decoded at a more subconscious level, according to the Research Council of Norway, which funded the study.

The dose of oxytocin intensified awareness of the emotions expressed in the photos, the researchers found. "Faces expressing anger stood out as angrier and less happy, and correspondingly, faces expressing happiness were happier," Siri Leknes, a cognitive neuroscientist with the University of Oslo, explained in a statement.

The research team also found that the oxytocin had the greatest effect on those participants who had the lowest ability to judge emotions properly when given the saltwater spray. "This is really fascinating," Leknes said. "The people who need it the most are thus the ones who get the most out of using the hormone."

Since most mental health disorders, as well as cases of drug abuse, diminish one's ability to recognize the feelings of others, these findings bolster claims that oxytocin might help some patients restore social function. Leknes said the hormone would not be a "cure-all" for mental illness or drug addiction, but a dose of oxytocin may make some individuals better equipped to interpret signals from those around them.

Many doctors already prescribe oxytocin for the treatment of autism and other disorders that effect social function. "In such cases, however, it's a matter of isolated treatments which are not evaluated as a whole," Leknes said. "It is important that we research this to gain greater insight into the effect."