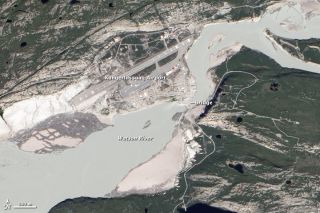 Melting ice in Greenland has swelled the island's rivers with water. A NASA satellite snapped a photo of meltwater overflowing the banks of the Watson River near Kangerlussuaq, a key air transportation hub, on July 12.

Two weeks later, however, river levels have receded somewhat, according to a release from the NASA Earth Observatory.

"Water rises every year, but I've never before observed it at this level of discharge," said Richard Forster, a University of Utah researcher who has done extensive fieldwork in Greenland, in a statement. "It was also about two weeks prior to the normal seasonal peak."

The town, known as Kanger, hosts one of the island's busiest commercial airports and is a frequent departure point for scientific research flights. It lies about 74 miles (125 kilometers) from the sea.

The water most likely came from melting of the ice sheet — rather than an ice-dammed lake bursting or glacial lake drainage — as the high discharge was maintained for so long, Forster said.

The flooding follows reports that 97 percent of Greenland's ice sheets thawed on the surface, according to satellite measurements. Only four days before,  just 40 percent of the surface ice layer was thawing.

This year's ice melt is well above average: About half of Greenland's surface ice tends to melt every summer, with the meltwater at higher elevations quickly refreezing in place and the coastal meltwater either pooling on top of the ice or draining into the sea. [Giant Ice: Photos of Greenland's Glaciers]

The massive melt may have been caused by a ridge or dome of warm air hovering over Greenland.

Signs of ice melt were even found around Summit Station in central Greenland, which at 2 miles (3.2 kilometers) above sea level is near to the highest point on the ice sheet.

The melting characteristics of such a huge ice sheet — spanning 656,000 square miles (1.7 million square kilometers) — is important for various reasons, particularly its potential effect on sea levels. If melted completely, the Greenland ice sheet could contribute 23 feet (7 meters) to global sea-level rise, according to a 2007 report by the Intergovernmental Panel on Climate Change, the international body charged with assessing climate change.

Whether or not this recent massive melt will affect the overall ice loss this summer, and as such bump up sea level, is still an open question.

In other Greenland-melting news, a massive iceberg that recently broke away from one of Greenland's largest glaciers is making its way downstream and toward the open ocean, as shown by a new satellite photo.

The drifting island of ice split from the Petermann Glacier's ice shelf — the front end of a glacier, which hangs off the land and floats on the ocean.

Thenewly birthed berg is estimated to be about 46 square miles (120 square kilometers), and finally broke away from the floating tongue of ice on Monday, July 16.