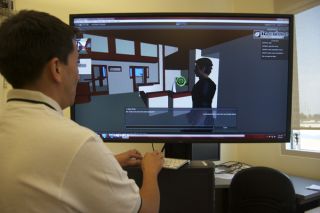 It may look like a video game screenshot, but this is serious business. The image displays the kind of faithfully reconstructed crime scene that detectives and other investigators would study if they used a tool called IC-CRIME (Interdisciplinary Cyber-enabled Crime Reconstruction through Innovative Methodology and Engagement).

Researchers at three universities, led by North Carolina State University, are developing IC-CRIME with support from the National Science Foundation. The program is designed to help police investigators work more efficiently. It allows them to virtually revisit and analyze crime scenes long after the physical spaces have been cleaned up. IC-CRIME also makes it easier for investigators to collaborate across geographic and organizational boundaries.

In TV crime shows, investigators have easy access to one sleek, high-tech tool after another. But in the real world, forensic analysis of crime scenes can be laborious and less technologically advanced. For example, police investigators must rely on myriad photographs as well as sketches and written or tape-recorded notes to capture the details of a crime scene.

But IC-CRIME gives them a 3D reconstruction of the crime scene that they can view from any angle. A laser scanner and high-definition camera recreate the scene and a game engine (Unity 3D) renders the scene data in the virtual environment. The scanner can capture millions of data points within a few minutes. All data are stored on a central server that the IC-CRIME software can access and run within a Web browser.

Each IC-CRIME user is represented by an avatar that can communicate in real time with other users' avatars. Users can place notes where important evidence has been found or key events have occurred, link these notes to external content such as crime documents, lab reports or photographs, and share their notes with others. The system also allows users to employ crime-solving equipment such as a virtual measuring tape and a line-of-sight tester. The system also will allow users to develop scripts, or “what-if scenarios” to test various theories about events connected to the crime.

In addition to NC State, IC-CRIME is being developed by researchers at Arizona State University and Indiana University.

You can "tour" the tool at the IC CRIME website.