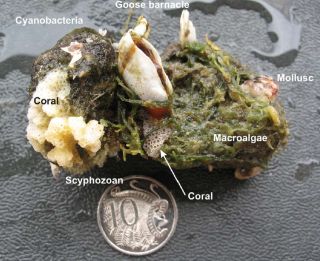 A piece of pumice colonized by coral and other organisms, with an Australian coin for reference.
(Image: © Scott Bryan et al)

The Great Barrier Reef's amazing diversity of life gets a helping hand from distant underwater volcanic eruptions, a new study has found.

Submarine volcanoes can spit out trillions of pieces of floating rock upon which corals and other organisms hitch a ride to the world's largest reef, where they can thrive and multiply, according to research published this month in the journal PLoS One.

Study co-author Scott Bryan, a researcher at Queensland University of Technology in Brisbane, Australia, said these types of eruptions are rather frequent, occurring about once a decade or more, and helped form the reef in the first place, bringing in potentially billions of plants and animals.

Shortly after the 2006 eruption of an underwater volcano near the Pacific island of Tonga, researchers found a wide variety of organisms hitching a ride on volcanic pumice, Bryan told OurAmazingPlanet. The volcano spit out many large chunks of pumice that initially covered 179 square miles (440 square kilometers) of ocean, but eventually  fragmented into at least 10 trillion small pieces, the largest being about 10 inches (25 centimeters) in diameter. [Images: A Trip to the Coral Triangle]

Almost all of these chunks, or clasts, had some sort of organism on them, Bryan said.

The floating rocks traveled more than 3,000 miles (5,000 km) over the next eight months, picking up more than 80 species of corals, anemones, barnacles, mollusks and crabs before ending up in the Great Barrier Reef and the coast of Australia, Bryan said.

The rock regatta picked up corals and other reef-building species while passing near reefs near Fiji, Vanuatu and elsewhere in the western Pacific along the journey, Bryan said.

"We have a diverse group of species present on the pumice in extremely high numbers, which means they are likely to succeed in colonizing a new environment," Bryan said.

Billions and billions of colonizers

Once on the reef, animals like crabs and mollusks can easily drop off into their new home. Corals can colonize the area if the pumice sinks to the bottom, or the coral may reach maturity while floating and release larvae into the reef.

"These things can grow on the pumice until they're ready to reproduce," said Judith Winston, a marine biologist at the Virginia Museum of Natural History, who wasn't involved in the study. "It's like a boatload of people landing on a desert island as opposed to one person."

This is the first "natural experiment" in which a huge raft of pumice has been followed over time until it started to wash up on the beaches, Winston said. The other research on pumice is mostly anecdotal and took place after pumice had already arrived somewhere, she said.

Pumice rafting is an important way that life gets around. "It hasn't been considered nearly as important in spreading marine animals as it probably is, and probably has been," Winston said.

And since pumice rafts have likely been around since life itself, it's shaped the ocean and the world as we know it, said Martin Thiel, a researcher at Catholic University of the North in Chile who wasn't involved in the study.

This influx of diversity into the reef likely helped originally build the reef, and may help replenish areas destroyed by human activity or hurricanes, Bryan said. Pumice rafting is a faster method of colonizing than the slow, step-by-step process previously assumed to predominate, in which coral larvae swim out from one reef into a nearby area, he said.

With pumice rafting, "You're basically colonizing the whole area instantaneously, as opposed to step by step," Bryan said.

The process could also bring in detrimental reef species, although this isn't likely to be an enormous threat since pumice rafting is a natural process that has been going on for a long time, Bryan said.