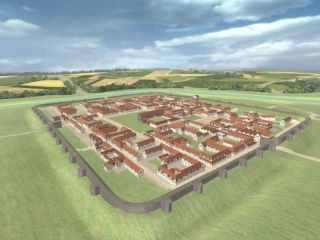 Reconstruction of how the Caistor Roman town may have looked in the 4th century A.D., showing the street grid and public buildings, including bath houses.
(Image: © Daniel Voisey)

New details of a buried ancient Roman town in England are being revealed for the first time using the latest technology.

The newly uncovered features include street grids, clustered public buildings such as temples and baths, the town’s water supply system and possibly a large theater.

The Roman town of Venta Icenorum at Caistor St. Edmund in Norfolk, England, was initially discovered in 1928 when Royal Air Force craft snapped images of the site. Due to the particularly dry summer that year, details of the Roman town stood out as parched lines in the barley fields.

On March 4, 1929, the pictures appeared on the front page of The Times of London, causing a public sensation.

Now, with a so-called cesium vapor magnetometer that detects changes in magnetic field lines, scientists can "see" more beneath the open fields. The results are confirming the street plan shown by previous aerial photographs as well as a series of public buildings known from earlier excavations.

"The results of the survey have far exceeded our expectations," said lead researcher Will Bowden of the University of Nottingham in England. "It's not an exaggeration to say that the survey has advanced our knowledge of Caistor to the same extent that the first aerial photograph did 80 years ago."

The survey showed clear traces of a large semi-circular building next to the town's temples, a typical location for a theater in Roman Britain.

"This is a fantastic discovery, and it goes to show that Caistor Roman town still has a great number of secrets to be disclosed in the years ahead through surveys or excavations," said David Gurney, the principal archaeologist at Norfolk Museums & Archaeology Service.

Caistor lies in the territory of the Iceni, the tribe of the British queen Boudica who famously rebelled against the invading forces of the Roman Empire in the first century A.D.

Caistor's long preservation can be attributed to the fact that the town was ultimately supplanted by medieval Norwich and transformed into green fields rather than demolished for modern city buildings. In contrast, most Roman towns with a similar long occupation history were replaced by, and buried beneath, modern towns of Britain and Europe.

The new survey challenges earlier interpretations of the ancient town, which reconstruction paintings often depicted as a crowded urban area. While the survey showed buildings clustered along the town's main streets, other areas within the street grid were empty and possibly used for agriculture, the researchers say.

They also suggest that the seeming provincial Roman Caistor may have actually been a major settlement from the Iron Age until the 9th century A.D. It was previously thought that life at Roman Caistor ended in the 5th century A.D. when the Roman occupation ended and the Saxons came into power.

However, the new survey clearly shows a large ditched enclosure that cuts the surface of a Roman street, indicating people must have inhabited the area. This along with an earlier discovery of middle Saxon coins and metalwork near the site and the presence of two early Saxon cemeteries in the vicinity suggest the enclosures are possibly signs of continued life in the town after the Roman period.