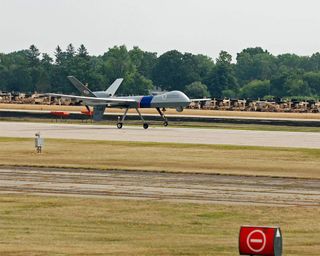 Who flies the robotic skies? Drones have evolved from the U.S. military's battlefield scouts into the hottest new gadgets for Homeland Security and local police departments. That growing swarm of flying robots in the U.S. has spawned a new effort to track down drone usage among government entities.

Here is the deal for the 2012 U.S. Drone Census. Anyone can anonymously submit contact information for government entities or institutions suspected of using drones, so that the Electronic Frontier Foundation and MuckRock (a watchdog group that files Freedom of Information requests) can leap into action by filing a public record request. Such efforts could help U.S. citizens find out about neighborhood police departments or local colleges using drones in their proverbial backyard.

Early legwork by MuckRock has already turned up a drone-related contract between the University of Arizona and defense contractor Raytheon. Another public records request led the Boston Police Department to go on record as saying it has no drone plans.

Drones have plenty of legitimate uses among agencies, universities and police departments. They can do many surveillance or monitoring jobs far more efficiently than manned aircraft or helicopters, and often much more cheaply. Still, many people have concerns about drones becoming a common sight in U.S. skies.

Te U.S. military and government agencies don't hold a monopoly on flying drones — ordinary U.S. citizens can fly their own small drones within a limited distance and altitude based on current FAA regulations. But DIY drone owners who want to pack their flying robots for an airline flight may want to take precautions to avoid drawing unwanted official scrutiny. [Airport Held Drone Makers on Terrorism Suspicion]

The FAA has also released lists of public and private entities who have applied for authorization to fly drones in the U.S. — the result of a previous Freedom of Information Act lawsuit filed by the Electronic Frontier Foundation. Examples from include the U.S. Air Force, the NASA Ames Research Center and the Miami-Dade County Police Department.

Anyone curious about the U.S. military's drone activities worldwide can turn to a separate project by the independent researchers of Public Intelligence. Their project has mapped the Department of Defense's usage of drones based on publicly released documents.