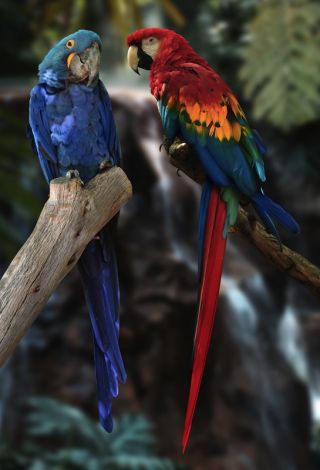 The U.S. Fish and Wildlife Service is a step closer to adding four macaw species to the "endangered" list, the agency announced Friday (July 6).

The birds — the great green macaw, the hyacinth macaw, the scarlet macaw and the military macaw — warrant protection under the Endangered Species Act, a Service analysis has found. The proposal to list the birds as endangered is now open to a 60-day period of public comment.

The macaws' range is in South and Central America, but the U.S. Fish and Wildlife Service (USFWS) lists endangered species regardless of their location. By doing so, the agency can regulate imports, exports and other cross-border activities that might harm the endangered animals.

The proposed listing comes after a request from the advocacy group Friends of Animals, which asked the agency in 2008 to consider listing 14 parrot species. Officials have already ruled on the other 10 species.

The birds in question include the great green macaw (Ara ambiguous), which lives in Costa Rica, Ecuador, Colombia, Honduras, Nicaragua and Panama. According to the Service, there are likely only 1,000 to 3,000 of these birds left in the wild. Likewise, the brilliant blue-and-green military macaw (Ara militaris) is losing habitat in northern Mexico, Ecuador, Peru, Venezuela, Bolivia and Argentina. Officials believe fewer than 10,000 of these birds survive in the wild.

The dark blue hyacinth macaw (Anodorhynchus hyacinthinus), which is the world's largest parrot, now lives only in small regions of Brazil. There are just three populations of hyacinth macaws left in the world, totaling only a few thousand birds. Deforestation could destroy the rest of this bird's habitat by 2030, the USFWS reported.

The agency also proposes listing two subspecies of scarlet macaw (Ara macao) as endangered. These populations are threatened not only by habitat loss, but also by the illegal pet trade.