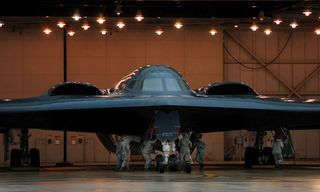 Have expensive stealth bombers and cheap roadside bombs changed the face of modern warfare? The question of what technologies count as "game-changers" dominated the first of several U.S. military workshops meant to identify the most disruptive science and technology.

Much of the NeXTech workshop in Washington, D.C., looked at tomorrow's science and technology that could change warfare in 2025 — robots, 3D printing, energy, human enhancement and smarter software. But the gathered scientists, industry leaders and military officers also disagreed about how to define a technology's impact as "game-changing," even as they tried to keep focused on the future.

"The faster rate of change means that it's increasingly hard to identify what are promising, what are useful technologies," said Peter Singer, director of the 21st Century Defense Initiative at the Brookings Institute and leader of the NeXTech workshop on June 4.

This first "Science and Investment" workshop looked at the implications of game-changing technologies as part of the broader plan for funding science and technology. (The workshop operated under the Chatham House rules that ask participants to not identify others by name or organization, unless individuals grant permission.)

Why the mind matters

Many game-changers didn't transform the battlefield overnight, Singer said in his opening remarks for the NeXTech workshop. Their use, impact and even "game-changer" status also depended upon psychological and social factors.

Take the machine gun as an example. Lt. Col. George Custer had several Gatling machine guns available when he led part of the Seventh Cavalry to its doom at the Little Big Horn — but he left the guns behind because military doctrine viewed the machine guns as artillery that would not help in open battle against Native Americans. [US Soldiers Make Real 'Predator' Machine Gun Pack]

Moral reasoning also affects the use of game-changing technologies. The British Navy initially described submarines as "cowardly" weapons and was reluctant to use them. The Germans had less hesitation in using their submarine fleet to threaten the UK's sea supply lines during the two world wars.

A society's organization around a technology can also transform its effectiveness, a NeXTech participant pointed out. Both the British and German militaries had radar at the start of World War II, but the British used it more effectively as part of an early-warning system with human ground observers and control centers. That organization allowed the British to counter German bombing raids with the smaller Royal Air Force during the Battle of Britain.

Even a nation's mentality toward casualties during war can influence a technology's game-changer status. The U.S. public accepted tens of thousands of casualties among its young soldiers, sailors and airmen during World War II, but for many reasons has been far less tolerant of the fewer, if no less horrific, casualties caused by a relatively cheap and basic technology — insurgents' roadside bombs in Afghanistan and Iraq.

"People have gone back and forth on whether IEDs are game-changing," a NeXTech participant said. "Really the issue is that, psychologically, the U.S. has decided we're not going to accept casualties."

The NeXTech workshop's mix of civilian and military thinkers didn't create an immediate road map for the Pentagon to follow. But the workshop participants did begin looking at the possible impact of five future technology areas, starting by the year 2025.

Tireless robot warriors and drones have already become a force on modern battlefields, and could continue to replace human warriors in dangerous scenarios. They also seem poised to have a huge impact on entire industries and national economies — not to mention the personal lives of people as they become servants and companions.

3D printing may create new materials and turn both industrial manufacturing and battlefield DIY (do it yourself) upside down. The same power to create almost any digital design as a real-world product on demand could also lead to a slew of counterfeit parts that already plague the U.S. military and civilian industries. [Why a DIY Pioneer Dislikes 3D Printing]

Human enhancements that improve intelligence, speed up learning or make every soldier as hardy as a Special Forces operator could begin affecting the battlefield in the next few decades. But the "bio" group cautioned that the biggest challenges would come from ethical, legal and other societal restrictions.

Finally, the "software" group pointed to a new generation of smarter software that can learn, adapt and act autonomously as a possible game-changer. The easy access for deploying software may also create new security headaches for both the military and law enforcement.

Such observations may serve the Pentagon's Rapid Reaction Technology Office well in its next several workshops. Singer praised the participants at the June 4 workshop as spanning several generations of military and civilian leaders who have seen some of the greatest technological changes of the modern age.

"We're talking about the year 2025 — a time when many young U.S. Marines and future enemies may be younger than the iPhone," Singer said.