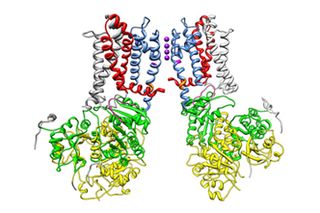 Like guards who control entry and exit from a building, specialized molecules like the ion channel pictured above regulate which ions pass through a cell’s membrane. Researchers have recently discovered that this channel has a special "messy" region that is important in its function.

The ions in our bodies include sodium, calcium and potassium, and they allow nerves to signal, muscles to flex and hormones to be secreted in an orderly way. Ion channel proteins are crucial to maintaining healthy cells, and disruptions can contribute to epilepsy, asthma, chronic pain, Parkinson's disease and other disorders.

For more than a century, chemists have understood that the flow of ions across cell membranes could produce electrical signals and the equivalent of an electrical current. In 1998, scientists got the first good look at the potassium ion channel when Rockefeller University’s Roderick MacKinnon captured its structure at the atomic level. This was such a fundamental achievement that MacKinnon received a Nobel Prize in chemistry just five years later.

Now researchers at Washington University School of Medicine in St. Louis have unveiled some of the inner workings of the big potassium — "BK" — ion channel. In the image above, potassium ions (purple dots) move through the narrow opening of the channel (coiled structure) to generate electrical signals and enable cellular communication. By getting an up close look, the scientists learned that a flexible segment of the protein that’s disordered — or lacks a defined structure — temporarily blocks this passage after the electrical signal is fired.

Because a protein’s 3-D shape determines its function, it’s intriguing that an unstructured piece of one — and potentially many others — has certain tasks, too. The scientists demonstrated that the essential role of the disordered BK channel segment is to nestle into a binding site to inactivate the channel. The researchers suspect that the segment’s unstructured shape helps it squeeze through tight spaces to get to the binding site.

The work could lead to a new understanding of why functionally important parts of some proteins may not have well-defined structures. It also could help scientists think about new ways to treat channel-related disorders.