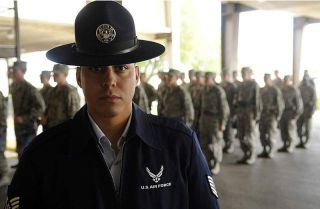 Military recruits have marched off to boot camp with nothing more than their families' well-wishes in the past, but today's warriors could get a little help from their smartphones. The U.S. Air Force Reserve has drawn up a wish list for a smartphone app that can help recruits adjust to basic training and military life.

The dream app combines nutrition and exercise features that even civilian smartphone owners might envy. One app feature would count calories based on photos of food taken by the phone. Another would map a recruit's runs based on their smartphone GPS. A third feature would even provide a digital assistant similar to the Apple iPhone's Siri that can talk fitness encouragement to trainees.

But the app ideas list also has plenty of military-centric features based on learning military law, chain of command or individual responsibilities as an Air Force Reserve member. Even suggested games have themes, including "Name the Military Tune" or "Weapons Familiarization" for the U.S. military's standard-issue M-16 assault rifle — not to mention games for learning rank, chain of command, military law, and Air Force history.

Such games would combine with possible social networking features that include basic profile information (including gender, base of assignment and ship date) and help bring people together for carpooling or to cooperate in fitness challenges. The Air Force Reserve envisions the app allowing up to 4,000 users at a time accessing the Internet through smartphone, netbook, tablet or computer.

The Air Force Reserve put out the call for interested smartphone app-makers in a "request for information" notice on June 13 with an original deadline of June 26 for any interested app-makers. But it has already extended the contact due date to July 6 because of "significant interest and questions."