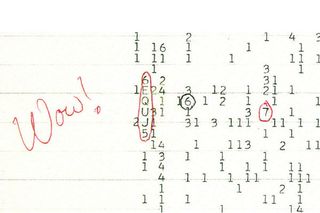 A scan of a color copy of the original computer printout bearing the Wow! signal, taken several years after the signal's 1977 arrival.
(Image: © The Ohio State University Radio Observatory and the North American AstroPhysical Observatory (NAAPO))

If there's something you'd like to say to aliens, now's your chance. The Wow! signal, a mysterious radio transmission detected in 1977 that may or may not have come from extraterrestrials, is finally getting a response from humanity. Anyone can contribute his or her two cents — or 140 characters, to be exact — to the cosmic reply via Twitter.

All tweets composed between 8 p.m. EDT Friday (June 29) and 3 a.m. EDT Saturday (June 30) tagged with the hashtag #ChasingUFOs will be rolled into a single message, according to the National Geographic Channel, which is timing the Twitter event to coincide with the premiere of the channel's new series, "Chasing UFOs."

Then on Aug. 15, exactly 35 years after the Wow! signal was detected, humanity's crowdsourced message will be beamed into space toward a region of the sky that may contain a habitable planet.

"We are working with Arecibo Observatory to develop the best way to encrypt the transmission," said Kristin Montalbano, a spokeswoman for the National Geographic Channel. "Earlier transmissions have focused on simplicity, whereas this one will rely more on creating a complex but noticeable pattern, hopefully standing out from other random, natural noise.

"More than likely we will be using binary phase codes," or sequences of 1s and 0s.

The Wow! signal is the only blip of incoming data to have stood out from the noise in the four decades that astronomers have been scouring the heavens for signs of life — an effort known as the Search for Extra-Terrestrial Intelligence, or SETI. The Big Ear radio observatory at Ohio State University picked up the intense 72-second radio transmission coming from the direction of the constellation Sagittarius. At its peak, the transmission was 30 times more powerful than ambient radiation from deep space, prompting the volunteer astronomer Jerry Ehman to scrawl "Wow!" next to the data on a computer printout, giving the signal its name.

No one knows whether the seemingly unnatural signal really was beamed toward us by aliens, and despite great effort, scientists have never managed to detect a repeat transmission from the same spot in the sky. Thirty-five years on, the Wow! signal remains a complete mystery. [7 Huge Misconceptions about Aliens]

It is hoped alien scientists — if they do, in fact, exist — will have better luck decoding humankind's reply.

"After recognizing the pattern, the scientists on the other end would theoretically be challenged to find a way to decrypt the transmission and understand our language.  No small feat, but surely finding a signal of intelligent origin from another planet would be a momentous and impactful find for them — assuming they don't already know about us from past visits!  Or already follow us on Twitter," Montalbano told Life's Little Mysteries.

And if they're the aliens that sent the Wow! signal in the first place, they are likely to be an extremely advanced civilization. Scientists say the signal would have required a 2.2 gigawatt transmitter, vastly more powerful than any existing terrestrial radio station.