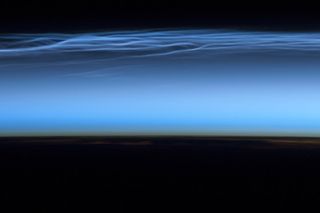 Polar mesopheric clouds captured by an astronaut aboard the International Space Station on June 13, 2012 above the Tibetan Plateau.
(Image: © NASA Earth Observatory)

Delicate, shining threads of white seem alienlike against the darkness of space in a new image of a type of "night-shining" or noctilucent cloud taken from the International Space Station (ISS) and released today (June 25).

More specifically, these polar mesospheric clouds (a type of noctilucent cloud) were hovering above the Tibetan Plateau on June 13 when the photo was snapped from the ISS. The lower layers of the atmosphere are also illuminated in the new image, captured by the Expedition 31 crew, with the lowest layer, called the stratosphere, shown in dim orange and red tones near the horizon.

Normally too faint to be seen, noctilucent clouds are only visible when illuminated by the sun from just below the horizon, while the lower layers of the atmosphere are in Earth's shadow. The strange clouds form between 47 and 53 miles (76 and 85 kilometers) above Earth's surface where sufficient water vapor is available. But clouds also need something for these water molecules to stick to, like dust. As the water gathers onto these dust or other particles it forms droplets or ice crystals.

How noctilucent clouds get their dust particles, and thus exactly how they form, is still debated. Possible contributors include dust from meteors, global warming and rocket exhaust. However, it's tricky to get wind-blown dust into the mesosphere where polar mesospheric clouds form. As such, scientists also speculate noctilucent clouds get their dust from outer space, as some tiny particles from meteoroids remain aloft in the atmosphere.

Recent research has suggested changes in the composition of gases in the atmosphere or temperature has caused these clouds to get brighter.