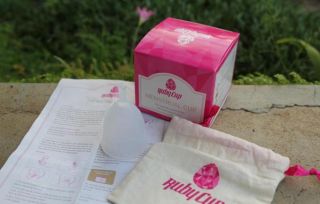 Ruby Cup and its packaging. Ruby Cup is a reusable silicone menstrual cup that's being sold in developing countries. The product helps the world's poorest women and girls stay active in school and at work during their periods.
(Image: © Ruby Cup on Facebook)

They may seem strange to some, though the women who use them tend to be enthusiasts: Menstrual cups are a washable, reusable alternative to pads and tampons. Women often choose them because they don't create as much waste as traditional menstrual products; with some models, a woman only needs to buy one cup in her lifetime. In the U.S., the cups are stereotypically associated with women's studies classes, avid environmentalists and Berkeley, Calif. But one startup is starting to bring them to developing countries, where a reusable cup may free girls from poor families from scrambling to find menstrual products every month, possibly missing school or work if their families can't buy pads for them.

Menstrual cups, such as the Diva Cup or Moon Cup, have been gaining popularity in the U.S. and Europe for several years, but this is the first time a company is selling the same product to women in developing countries. The cups, which are made of silicone or another rubbery material, fit inside the body and catch menstrual blood. Users empty them out and boil them to sterilize them between uses. In contrast, other menstrual products, such as tampons or pads, are discarded after two to eight hours of use.

Ruby Cup manufactures low-cost silicone menstrual cups in Kenya and distributes them to local saleswomen. The saleswomen then sell the cups directly to customers.

Some of the benefits the company touts are the same ones that customers in developed countries seek. The cups, which are designed to last 10 years, reduce waste and save women money over a lifetime of buying menstrual products.

But for women and girls from the poorest families, there are several more benefits. In 2010, the World Health Organization reported that girls may miss school when they're menstruating because they're afraid to change their menstrual products at dirty school toilets that don't offer any privacy. Ruby Cup users don't need to change or touch the cup for up to 12 hours — far longer than pads or tampons — which means they're free to do their business during the day without worrying about finding a clean place to deal with their periods.

The cup also represents a one-time purchase that eliminates ongoing costs. Ruby Cup's founders, three women from Denmark, visited Kenya in 2011 and found that some girls and women couldn't always afford menstrual products. They improvised with rags, bark or bits of mattress. With a menstrual cup, women get a product that works well and lasts.

The team sells the same product online, for a higher price, to customers in developed countries. (For a U.S. customer, a Ruby Cup costs $35. Competitors Diva Cups and Moon Cups cost about $25). The higher price supports the product in developing countries. It also assures customers in developing countries that they are getting the same high-quality product as everyone else, creating demand, according to the Ruby Cup website.

The Ruby Cup's creators, who live now in Kenya, won a place in Sustainia 100 at the United Nations' Rio+20 conference June 20. Sustainia 100 is a list of 100 socially and environmentally friendly solutions to world problems. Sustainia praised how Ruby Cups created jobs for saleswomen, saved money for its customers and reduced waste.