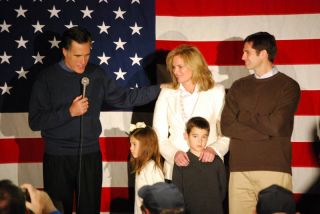 With Mormon Mitt Romney running for president, the Church of Jesus Christ of Latter-day Saints has been in the spotlight. Now, a new survey finds that the same proportion of Americans would refuse to vote for a Mormon president today as in 1967.

Gallup originally asked about Mormonism and politics in 1967, when Mitt Romney's father George Romney vied for the 1968 Republican nomination for president (he would lose out to Richard Nixon).

Surveys since 1967 have shown that an average of 19 percent of respondents would reject a Mormon presidential candidate due to the candidate's religion. The number reached a high of 24 percent in 2007. This year's 18 percent is down four percentage points from 22 percent last year.

People with lower levels of education are less likely to say they would vote for a Mormon, Gallup found. Protestants, Catholics and non-religious people are all equally likely to say they'd reject a Mormon for president.

However, only 57 percent of Americans know that Romney is a Mormon, Gallup found. Even if knowledge of his religion becomes more widespread, it's not clear whether religious bias would have an effect on his campaign. According to a 1960 Gallup poll, 21 percent of Americans said they wouldn't vote for a Catholic for president. Nevertheless, John F. Kennedy won the presidency shortly thereafter.

That could mean that as the campaign heats up and voters learn more about Romney, his Mormonism could become a handicap, Gallup researchers noted.

"The stability of resistance to a Mormon presidential candidate over the past 45 years is an anomaly, given that resistance to a candidate who is black, a woman, or Jewish has declined substantially over the same period of time," they wrote.

Editor's note: This article has been updated to correct the first reference to the LDS Church. The full name is the Church of Jesus Christ of Latter-day Saints.