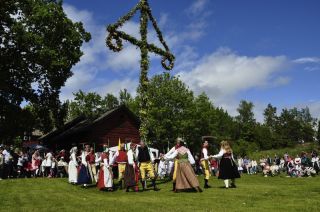 Wednesday, June 20, is the summer solstice, the official beginning of summer in the Northern Hemisphere. It's also the longest day of the year by a fraction of a second.

Ancient pagans once celebrated the summer solstice as a day of healing and fertility.

But why leave all the fun to the ancients? Solstice celebrations persist to this day. Here are a few ways that modern people celebrate the sun.

Yoga in Times Square: The forecast in New York is for a scorcher, but lovers of hot yoga can rejoice. The city's "Solstice in Times Square" features free yoga class all day from 7:30 a.m. to 8:30 p.m. Yogis can salute the sun and strive for inner peace in one of the busiest spots on the planet.

Seattle sun: The Pacific Northwest isn't known for blue skies, but that hasn't stopped Seattle's Fremont neighborhood from hosting a solstice parade every year since 1989. The parade, complete with body-painted cyclists, kicks off a two-day street festival called the Fremont Fair. This year's festivities took place on June 16 and 17, so look out for another chance to attend next solstice season. [Gallery: Our Amazing Sun]

Getting up some speed: Those who prefer to push themselves can spend their extra daylight hours on a mountain bike at the 24 Hours Summer Solstice Mountain Bike Festival in Bolton, Ontario. This relay race event is on June 23 and 24 this year at the Albion Hills Conservation Area. If you're not into riding or relaying around the clock, 15-hour race-course options are available.

Keep with tradition: Midsummer, just after the summer solstice, is a big deal in Scandinavia. Skansen, an open-air museum and zoo in Stockholm, Sweden, hosts a festival complete with folk dancing, fiddlers, and, yes, a maypole. Midsummer Eve falls on June 22 and Midsummer Day on June 23 in 2012.

Celebrate long days: Nowhere is the length of summer days more obvious than in the northern latitudes. So head to Europe's northernmost capital, Reykjavik, Iceland, for solstice festivities on June 23. You can party your way through the city (where many bars stay open all night) or head to Grimsey Island, Iceland's northernmost point, for a real view of the midnight sun.

See ancient art: In the 13th century in what is now Petrified Forest National Park in Arizona, Puebloan people carved a series of petroglyphs on rocks near their homes. One circular petroglpyh is a perfect target for the summer solstice. In the two weeks around this date, sunrise interacts with the petroglyph, sending shadows and light across its surface. Views of the carvings can be accessed from a short 0.3-mile loop trail in the park.

Sunrise with a snake: Twenty miles south of Bainbridge, Ohio, a mysterious mound rises from the Earth. A bird's-eye view would reveal that this mound is in fact man-made, and that it is in the shape of a giant serpent.

On the summer solstice, the sun rises directly over the head of this serpent, which was likely created by the so-called Fort Ancient culture that thrived nearby between A.D. 1000 and 1550. The Serpent Mound park is open during daylight hours, so solstice-seekers can stroll around the ancient snake and imagine the early astronomers that must have overseen its construction.

Sunrise at Stonehenge: True solstice connoisseurs will want to make haste to the ancient monument of Stonehenge, where thousands of people arrive each year to watch the sun rise over the monument. The original purpose of Stonehenge is something of a mystery, but today's solstice visitors are almost certainly part of a long astronomical tradition at the stone monument. Stonehenge seems to be oriented toward the summer solstice sunrise and may also align with certain lunar phases.