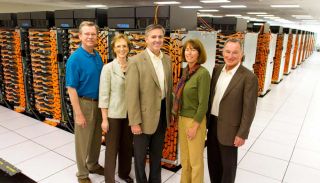 Sequoia, an IBM supercomputer at Lawrence Livermore National Laboratory in California, was on June 18, 2012 named No. 1 on the TOP500, a list of the world's fastest supercomputers.
(Image: © IBM | Jeffrey Gluck)

A U.S. supercomputer has won back the crown in the never-ending battle for the world's most powerful supercomputer. Its victory is the latest milestone marking the steady climb of computing power all across the globe.

The Top500 industry list gave its No. 1 ranking to the Sequoia supercomputer housed at Lawrence Livermore National Laboratory in California — a spot earned by Sequoia's ability to crunch 16.32 quadrillion calculations per second (16.32 petaflops/s). Such supercomputing power is used by the U.S. National Nuclear Security Administration to simulate nuclear weapons tests for older weapons that have been sitting in the U.S. arsenal.

The Sequoia victory also bumps Fujitsu's "K Computer" down to second place. The Japanese supercomputer's 10.51 petaflops/s had ruled the list for the past two years after beating out China's Tianhe-1A.

(Both Sequoia and Mira represent the third generation of IBM's "Blue Gene" project designed to push supercomputing into the petaflop range.)

China rounds out the top 10 with its second supercomputer on the list.

The U.S. still holds the lion's share of high-performance computing in the world with 253 of 500 systems, even if that share has slipped from 263. Asia holds 121 systems, with China (68 systems) and Japan (34 systems) leading in that region. Europe has 107 systems with the U.K. (25), France (22) and Germany (20) in a tight race. Top 500 systems also appear in scattered countries such as Israel, Canada, United Arab Emirates and Australia.

But the U.S. could soon have a new supercomputer champion come online in 2012 – the 20 petaflop "Titan" supercomputer at the Oak Ridge National Laboratory.