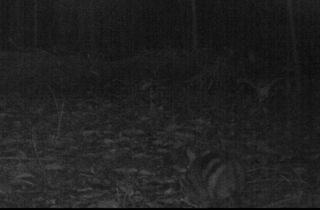 Can you spy the rare rabbit?
(Image: © Jennifer McCarthy.)

An elusive striped rabbit that has rarely been photographed has been caught on film deep in the forests of Sumatra, thanks to camera traps set up in an isolated mountain region of the Indonesian island.

The Sumatra striped rabbit is not only extremely rare, it is also extremely shy, emerging from hiding only under the cover of darkness. The secretive, nocturnal creatures were snapped scooting across the crowded forest floor in two national parks in 2011.

"We were really excited as soon as we saw the rabbit photos because we knew that they were not photographed very often," said Jennifer McCarthy, a doctoral candidate at the University of Massachusetts Amherst, and one of the researchers who oversaw the camera-trap project.

Research suggests the species is the rarest of the lagomorphs, the taxonomic order that includes rabbits, hares and pikas.

"With their unique coloring, they are pretty unmistakable," she told OurAmazingPlanet in an email.

The rabbits are listed as a vulnerable species by the International Union for the Conservation of Nature, an independent body that assesses the status of species around the globe. In 1996, the rabbits were listed as critically endangered; it's not clear what prompted the change.

The rabbits, known for their short ears and the distinctive wide, dark stripes that adorn their faces and bodies, live only in Sumatra. They have rarely been seen in the wild, and were photographed for the first time only in 1998, according to a statement from UMass Amherst.

McCarthy said the newly published photographs show that that there are at least a few of the animals living in two different national parks.

It's not clear if additional populations are lurking in other regions of the island, but the recent find should encourage local officials to protect the parks from development and human encroachment, McCarthy said.