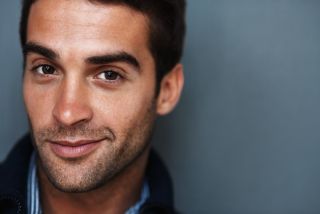 People can judge with surprising accuracy whether someone is gay or straight — even when they're looking at a black-and-white photograph, cropped of hair and identifying marks, and presented upside down.

The findings from a University of Washington study suggest people use a combination of clues from individual facial features and from the way those features fit together to make snap judgments about sexual orientation, said researcher Joshua Tabak, a graduate student in psychology.

"We may be doing this so efficiently that we may not even have to try to make this judgment," Tabak told LiveScience.

Tabak's is not the first study to find that people can correctly guess a person's sexual orientation from a photograph more often than just by chance. This "gaydar" isn't infallible: The rate of correct guesses is usually in the high 50 percent to mid-60 percent range, Tabak said.

Still, that's pretty impressive, he said, given that researchers use cropped faces without hair, jewelry or other possible hints about sexual orientation. [5 Myths About Gay People Debunked]

What earlier studies had not done was to tease out how people make these snap sexuality judgments. They might base it on individual facial features — nose or eyes — or they might look at how the features fit together in the face, such as how far apart the eyes are. Or it could be some combination of both.

Looking at faces upside down is known to mess up people's processing of how faces fit together. In one popular optical illusion called the Thatcher effect, it's tough to tell even when the eyes or mouth are flipped the wrong way around in an upside-down face. But even upside down, people are good at processing individual facial features.

Tabak and his co-author exploited this quirk of the brain by presenting photographs of 111 gay men, 122 straight men, 87 gay women and 93 straight women to 129 student volunteers. Some of the students saw upside-down faces, and others were shown the faces right-side up. In either case, the black-and-white cropped photos were presented for only 50 milliseconds.

As in previous studies, people were better than chance at guessing whether the faces belonged to gay or straight people. In a first for studies of this kind, the researchers were able to directly compare how people did when judging the sexual orientation of men versus women. They found that people were better at judging women correctly. There were fewer "false alarms" than when looking at men, Tabak said, meaning instances when a straight person was judged gay.

"Why this is we can only speculate," he said. "It's really interesting to speculate that there might be this ironic effect that because we're more familiar with the concept of gay men [in the media], maybe we're more liberal with labeling a man gay."

When looking at upside-down faces, people were still able to guess their sexual orientation correctly at rates better than chance — although not quite as accurately as when the faces were right-side up. That suggests both facial features (which can be processed in upside-down and right-side-up photos) and facial configuration provide hints into orientation, the researchers report Wednesday (May 16) in the journal PLoS ONE.

It remains to be seen how or if people use "gaydar" in real life, when they have more to go on than a glimpse of a photograph, Tabak said. He and his colleagues are now using brain imaging to monitor brain activity as people look at pictures of gay and straight individuals without knowing their sexual orientation. The results will help clarify whether these sexuality judgments are automatic, much like the judgments we make about people's gender.

"You don't think about judging whether someone is a man or a woman," Tabak said. "You just know."