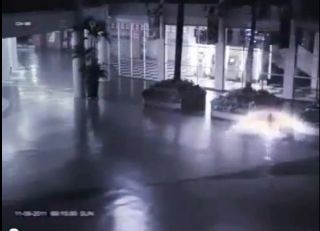 A security camera captured what appears to be a winged, brightly luminous figure falling to the floor of an Indonesian shopping mall. Some are saying the figure is an angel.

In the YouTube video — which was shot in Indonesia and allegedly took place on September 11, 2011, but is surfacing now — a vaguely humanoid figure seems to fall directly down from the right side of the screen, then immediately jump (or fly) away at an angle. About six seconds later, four figures (presumably mall security guards) rush from the left side of the screen to the area where the figure landed. The bright figure is only onscreen for about a second, and though it's quick, it is unmistakably something paranormal — unless, of course, it's totally faked. [Watch the Video ]

The video contains several dead giveaways of a hoax, including the fact that the amateur animator failed to account for the mall's reflective floor. Light sources near the top of the frame are clearly reflected in the polished, semi-glossy floor (which appears to be painted and sealed concrete), though when the brightly luminous figure falls to the floor, its light does not appear in the foreground on the right of the scene, where its reflected light should be.

Experts agree this is a key sign of a hoax.

"This 'creature' is very bright and is lighting up the area around it. Given the brightness that we can see, the object would light up the whole area — not just the small radius we are seeing," Derek Serra, a Hollywood visual effects artist who studied the video, told Life's Little Mysteries."Also, look at the light hitting the building behind it: given its movement, we would see high contrast shadows from the window frame and tree move across the inside of the building as the light moves around, but those shadows are conspicuously absent." [Visions of Angels Described in Bible May Have Been Lucid Dreams]

Several commenters on YouTube suspected that the hoax video was a publicity stunt or viral video promotion for an upcoming film, though it seems unlikely given the amateur quality of the work. Serra agreed. "I don't know any professional effects artists who would want to take credit for that."

This story was provided by Life's Little Mysteries, a sister site to LiveScience. Benjamin Radford is deputy editor of Skeptical Inquirer science magazine and author of Scientific Paranormal Investigation: How to Solve Unexplained Mysteries. His website is www.BenjaminRadford.com.