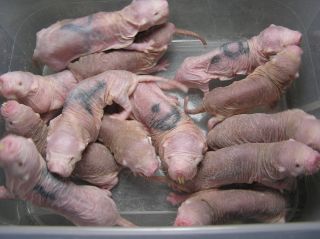 The naked mole rat's extended lifespan could be due to differences in protein destroying machinery in their cells, a new study suggests. These differences could lead to their extraordinarily long life.

Some find the animal hideous while others find it adorable, but anyway you cut it, the naked mole rat is a quirky creature. They are naked, blind, live underground, can survive for decades, and seem to be cancer-resistant. They live in social groups with a queen, similar to those of bees.

The study, published May 2 in the journal PLoS ONE, took insights from previous work, which had discovered that all of the mole rats proteins were superiorly sturdy throughout the animal's life. They wanted to see if the animals' protein-making and breakdown machinery were different from other rodents.

"More effective removal of damaged proteins within the cell would enable the animal to be able to maintain good function and is likely to contribute to its excellent maintenance of good health well into its third decade of life," study researcher Rochelle Buffenstein, of the University of Texas, said in a statement.

They found that the mole rats had more of the protein-making machines (ribosomes) and more protein-disposing machines (proteasomes) as well.

This means the naked mole rats turn over proteins quicker than other rodents, which is important in aging because it removed proteins that have been damaged by oxygen radicals released by the cells. Researchers think that over time the accumulation of damage from these oxygen radicals leads to functional decline, diseases and aging.

Because these mole rats live in stuffy burrows underground, they have higher than normal levels of damage from these oxygen radicals, but surprisingly, they live longer. The researchers think that the rats must have a really great defense system against oxygen radicals, which may also help them live even longer than other animals.

Specifically, the researchers found large numbers of immunoproteasomes, a type of protein disposer that removes proteins involved in activating the immune system. They are commonly found in the spleen and thymus, more than other cell types.

"Given the high levels of oxidative damage routinely seen in liver tissue of naked mole-rats, it is likely that, in the liver, these immunoproteasomes may play a critical role in the processing of oxidatively damaged proteins," Buffenstein said. "The composition of proteasomes and the presence of immunoproteasomes in the liver are key pieces of the jigsaw puzzle evaluating how naked mole-rats preserve health span well into their third decade of life."