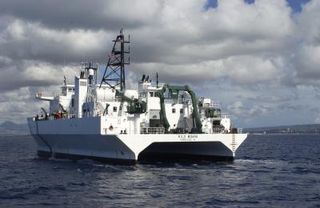 While in transit from Hawaii to Guam, the research vessel Kilo Moana detected the February 2010 Chilean tsunami.
(Image: © University of Hawaii, SOEST)

As the research vessel Kilo Moana made its way from Hawaii to Guam in February 2010, Maule, Chile, was being struck by a magnitude-8.8 earthquake. Minutes later, a tsunami generated by that quake came ashore, devastating Chilean coastal towns and causing damage as far north as San Diego.

Although the waves were a mere 4 inches (9.4 centimeters) high out in the open ocean thousands of miles from the earthquake, scientists on the Kilo Moana detected the tsunami using the ship's geodetic GPS system.

Now researchers say that a network of commercial ships equipped with similar tools could improve tsunami warnings around the globe.

"Our discovery indicates that the vast fleet of commercial ships traveling the ocean each day could become a network of accurate tsunami sensors," said James Foster, a researcher at the University of Hawaii-Manoa.

Current tsunami warnings rely on details from a land-based network of tide gauges and a water-based system of deep ocean pressure sensors to determine where a tsunami is headed and how big it might be. Those systems are sparsely distributed and expensive to maintain. In fact, nearly 30 percent of the water-based system was down at the time of the Chilean quake, including the sensor nearest Hawaii.

Saddling commercial ships with GPS technology capable of measuring small tsunami waves would be relatively inexpensive, Foster said. His team estimates that this type of network would have been able to detect the 2010 Chile tsunami within an hour. Such warnings could potentially give residents more time to evacuate and save hundreds of lives.

"If we could equip some fraction of the shipping fleet with high-accuracy GPS and satellite communications, we could construct a dense, low-cost tsunami sensing network that would improve our detection and predictions of tsunamis — saving lives and money," Foster said.

The team will soon install the GPS tools on one or two ships to show that they can quickly and accurately detect small tsunami waves in the open ocean.

Foster's findings were published May 5 in the journal Geophysical Research Letters.