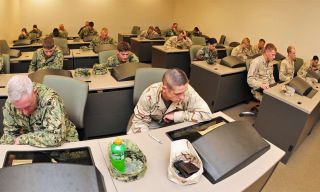 Imagine if you could ask Google to write a report based on information from relevant Wiki or article links — all from a simple question entered into Google's search engine. That scenario represents the military's vision for a computer system capable of helping overworked military staff members prepare a multitude of intelligence reports for officers and generals.

The military already uses updated Wiki pages and Internet search engines to help write reports, but its intelligence and operations staff still "spend large amounts of time preparing reports and briefings," according to the U.S. Navy. The Navy envisions a futuristic computer system that understands the meaning behind questions regarding a person, place or thing, and can compile a report based on its own Internet or database searches.

That project emerged in a Navy solicitation for an innovative solution from small business on April 27. The military's effort could also lead to commercial uses by law enforcement trying to track down information on America's most wanted — or better Internet search engines for everyone from students to business analysts.

Whatever its final form, the "Tell Me About" system has fairly modest goals for now. The Navy wants the final prototype to create reports with completeness of at least 80 percent (a B minus in school grade terms) and an accuracy of 90 percent (A minus). Such a report must also fit standard formats such as Microsoft Word documents, according to the Navy solicitation.

Success for the project could prove a huge timesaver for a number of groups and individuals, and might even enhance the U.S. economy's productivity. But having search engines capable of spitting out automatic reports may also revive the old debate among computer experts about whether the future of Google is making us stupid.