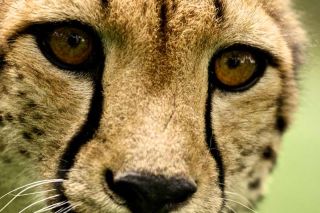 If you think of a really fast mammal, like a cheetah, you can almost guarentee they have big eyes.
(Image: © marcokenya | Shutterstock)

The fastest runners in the animal kingdom have some of the biggest eyes for their body size, researchers have found. Turns out, often the bigger the peepers the better the eyesight, which is beneficial when moving quickly.

"Eye size is one of the most important factors for understanding visual abilities and the evolution of visual adaptations," study researcher Chris Kirk, associate professor at The University of Texas as Austin, told LiveScience in an email. "In vertebrates, increases in eye size can benefit both acuity (detail vision) and sensitivity (vision in dim light)."

Some animals rely more on senses other than eyesight, but for many it plays an important role. This seems to be especially true in fast runners.

"If you can think of mammals that are fast like a cheetah or horse, you can almost guarantee they’ve got really big eyes," Kirk said in a statement. "This gives them better vision to avoid colliding with obstacles in their environment when they’re moving very quickly."

To figure out what factors influence eye size, the researchers collected measurements of eye size, body size and running speed in 50 mammals. They found that 89 percent of the variation in eye size among these mammals was due to body mass and maximum running speed.

Even after adjusting for body size, the researchers found a significant effect of running speed on eye size.

Interestingly, humans seem to buck this trend. We have large eyes, comparable to those of fast runners, like wolves, but our maximum running speeds are pitifully slow compared with other mammals.

"I'm often reminded of the Pekingese dog that I grew up with, who could run faster on four tiny legs than I could run on two long legs," Kirk told LiveScience. "At least in the case of humans, it's safe to conclude that fast running was not the selective factor that led to the evolution of our large eyes."

The study was published online Wednesday (May 2) in the journal Anatomical Record and was presented at the 2011 American Association of Physical Anthropology meeting.