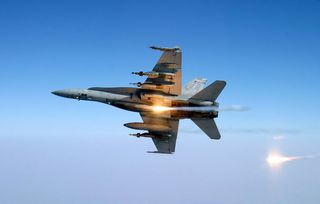 Whether it's a shoulder-fired missile targeting a cargo plane or an air-to-air missile chasing down a fighter jet, the U.S. Navy wants a better way to help military pilots survive possibly lethal encounters. A cloud of tiny particles to mask an aircraft's jet engine exhaust from heat-seeking missiles could do the trick.

Today's aircraft armed with such a countermeasure might deploy a cloud of particles capable of absorbing ultraviolet (UV) light. That could hide an aircraft's heat signature and confuse the electronic brain of a heat-seeking missile ? or even create a bigger diversionary target if the cloud gives off infrared light to distract the missile.

"The purpose of this effort is to design, develop and demonstrate a UV obscuring material that may be dispersed from an aircraft," according to the Navy's solicitation for the small-business innovation research program on April 27.

Modern missiles track aircraft by using either radar guidance or heat-seeking. The best stealth military jets can make their radar signatures small enough to be effectively invisible to radar-guided missiles, but hiding the heat signature from a jet engine's exhaust is both difficult and expensive, according to Defence Today magazine.

The Navy's proposal suggests the new heat-seeking missile countermeasure could use futuristic metamaterials ? engineered to have characteristics not found in nature ? or special semiconductor materials known as quantum dots. Having a cloud of such materials could prove more effective than today's countermeasures involving flares or chaff deployed behind a jet.

Any new countermeasure would deploy from the existing "AN/ALE Countermeasure Dispensing System" used on Navy jets such as the FA-18 Hornet or the upcoming F-35 Joint Strike Fighter.