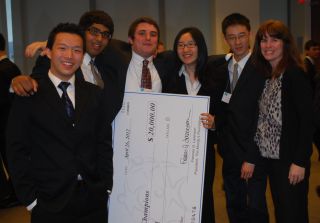 That high-speed rail future may not look too bright, according to some student papers presented at the Moody's Corp. headquarters next to the World Trade Center site on April 26. But the top six student teams who made the final cut of the Moody's Mega Math (M3) Challenge had plenty to smile about — they clustered in celebratory circles around giant prize checks after a long day of explaining how they had applied math to a messy real-world problem.

"It's really this idea that the real world in many cases is not someone locked in a room with a pencil and paper," said Ben Galluzzo, a triage judge for the M3 Challenge and a mathematician at Shippensburg University in Penn.

Galluzzo came up with this year's question asking students to rank 10 regions in order from most to least deserving of U.S. high-speed rail funding. He based the question on the U.S. Department of Transportation's High-Speed Intercity Passenger Rail Program ? a proposed $53 billion plan that has failed to attract the necessary funding from Congress.

Prizes of $1,500 and $1,000 also went to semifinalists and honorable mention teams that did not appear at the final event. But they still had the satisfaction of representing the best among the 961 teams that took part.

The M3 Challenge has previously challenged students to write 20-page papers on huge issues — such as figuring out how to keep Social Security financially afloat — within a 14-hour day over a given weekend. This year was no different.

"We wanted to offer the kids a choice of Saturday or Sunday in case they have other commitments ? kids today seem so squeezed with so many activities," said Michelle Montgomery, marketing manager at the Society for Industrial and Applied Mathematics (organizer of the M3 Challenge). "We start them early in the morning at 7 a.m., and they upload their papers by 9 p.m."

None of the teams that participated in the M3 Challenge knew what the problem was until the day of the challenge back in March. That led to some strategizing for creating a well-rounded champion team capable of doing more than just crunch numbers, said Stephen Guo, a senior at High Technology High School.

"Some of us are stronger in math, so we were trying to do the mathematical models," Guo told InnovationNewsDaily. "Some of us were more politics and policy, and some of us were economics. So we all have our strengths."

Guo and his fellow students joked about having a "slap bet" (familiar to fans of the TV show "How I Met Your Mother") to guess what this year's problem would be. They played ping-pong and grabbed Chinese food to stave off the stress. Such efforts paid off when they claimed the first-place prize of $20,000.

Speeding into the future

The High Technology High School students concluded that no future high-speed railways (beyond Amtrack's existing Acela line) would be profitable. But Guo was quick to point out how the calculations could change depending on the math model.

Whatever the conclusions, the contest organizers and judges had not expected the students to solve the problem of high-speed rail in 14 hours. They simply wanted to give students a better sense of why math matters in the world beyond doing calculations in a classroom.

"We're often bombarded by numbers generated by models from somewhere — news facts, polling numbers, predictions on where gas prices will be, unemployment numbers," Galluzzo said. "Even if you're not a math major, you should care about what those numbers mean."

Of course, the scholarship money and the possibility of internships at Moody's Corp. (owner of a well-known credit rating agency and financial analysis firm) help to see other benefits of doing the numbers. When asked by InnovationNewsDaily, the champion team reeled off possible college majors in applied math, computer science, mechanical engineering and economics.