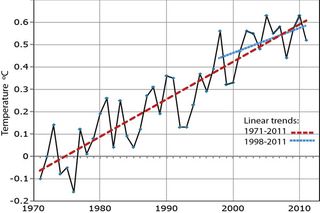 A scientist and author, James Lovelock, who once predicted doomsdaylike fallout from climate change has backtracked, calling his own projections and those of others "alarmist." Even so, climate scientists stress Lovelock's backtracking doesn't negate the reality of climate change, and in fact, his past predictions highlight some overall misunderstanding about planetary warming.

Lovelock, who introduced the Gaia Hypothesis describing life on Earth as a vast self-regulating organism some 40 years ago, also stated that since 2000, warming had not happened as expected.

"The climate is doing its usual tricks. There's nothing much really happening yet. We were supposed to be halfway toward a frying world now," Lovelock told MSNBC.com in an interview.

While warming may not have reached Lovelock's expectations, it is clearly happening. Global temperature data shows the world is heating up. The first decade of this century was the warmest on record for more than a century, part of a trend in increasing warmth over the past 50 years, according to the U.S. National Oceanographic and Atmospheric Administration.

Lovelock's hypothesis has played a prominent role in the environmental movement.

In a conversation with MSNBC's Ian Johnston, Lovelock agreed that the level of the greenhouse gas carbon dioxide in the atmosphere is rising, but contended that temperature has not increased as expected since 2000.

This is a significant reversal for Lovelock. In a column written for the U.K. newspaper The Independent in 2006, he wrote, "before this century is over, billions of us will die and the few breeding pairs of people that survive will be in the Arctic where the climate remains tolerable."

"As I see it, Jim's views were at the alarmist end of the spectrum of scientific opinion, so frankly I see him largely as just coming back into the fold of mainstream thinking," Mann wrote in an email to LiveScience. "That having been said, he has made some statements which appear to reflect a misunderstanding of what the science has to say." [Busted: 10 Climate Change Myths]

Kevin Trenberth, a climate scientist at the independent National Center for Atmospheric Research (NCAR) in Boulder, Colo., went further: "The fact is he knows little or nothing about climate change."

The past decade has seen a reduced rate of increase in warming. but it remains consistent with the overall warming trend, Trenberth said.

Global temperatures fluctuate from year to year and over short time scales as a result of natural variability. These ups and downs can obscure the overall trend, particularly if someone is looking to generate a particular result, he said. "You can take a piece of that record and get the wrong view as to what is happening."

Next year, Lovelock expects to release a new book. He said he believes his projections went too far in a previous book, "Revenge of Gaia" (Allen Lane/Penguin, 2006). Even so, Lovelock stressed that humanity should still try to curb its use of fossil fuels, according to MSNBC.com.