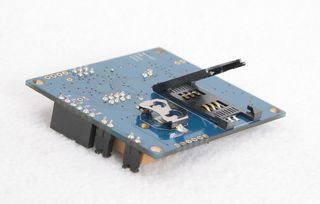 Today's smartphones and laptops already allow owners to track their whereabouts through GPS, but what if people want to find their stolen video game consoles or track the whereabouts of their car at all times? A new online project aims to sell a homemade tracking device capable of alerting owners through text messages and emails.

The Open Source Tracking Device has raised almost $20,000 on the crowd-funding website Kickstarter — far beyond its original $10,000 goal. The project's founder, Wayne Truchsess, came up with the idea after his brother-in-law's house was robbed of items such as a nephew's PlayStation 3 video game console. His early prototype began as a bulky tracker hidden inside a hollow "Trojan Horse" game console, but has since evolved into a smaller device.

Such tracking devices can follow owner commands issued by smartphone texting or email. Once a device verifies the owner's four-digit security code, it executes commands such as sending back its location coordinates (viewable on Google Maps).

Truchsess has also programmed the tracker to send text or email alerts for family cars going over a certain speed limit, for household gadgets leaving a "Geo-fence" set location radius, or if it detects a gadget being moved at all. But anyone with some programming knowledge can adjust the tracking device for his or her needs.

People who pledge to donate $126 and up can reserve preorders starting from the most basic version of the tracking device. The device comes in three differently priced flavors: barebones level (for DIY tinkerers), basic level (for ordinary customers), and advanced level (for programmers).

The device has a normal two-day charge on a standard battery, Truchsess says. He put everything together using off-the-shelf equipment.

Such a project appeals to protective gadget owners and people concerned about family members. But that doesn't mean creepers or people with questionable intentions couldn't also use the device — as with any technology.